The Big Twitch on a smaller scale

Posted on 2 March, 2017 by Connecting Country 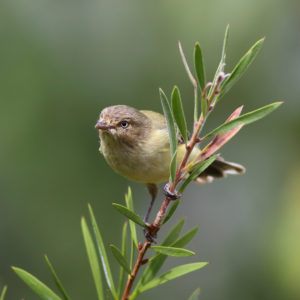 A Weebill – one of the smaller woodland birds on David’s “to get” list on his web page. Photographed by Geoff Park.

Those who attended Connecting Country’s 2015 AGM will recall Sean Dooley’s amusing recollections on his attempts to break the record for the most bird species seen in Australia within a calendar year.  He also wrote a self-deprecating book recounting this crazy adventure that he undertook in 2002 – The Big Twitch – which was popular among both birders and non-birders.  Tongue-in-cheek, the back cover of the book described Dooley’s efforts as possibly ‘the most pathetic great achievement in Australian history’!

Dooley’s book has inspired many other ‘twitchers’ to either attempt to break his Australian record, or to set new records for the most birds seen within state boundaries. (For example, Tim Dolby saw a then-record 345 species in Victoria during 2009 – click here to read of Tim’s journey).

However, as far as we are aware, no one has yet claimed the record for the most bird species seen within the boundaries of the Mount Alexander Shire in a calendar year.  However, that is all set to change, with local birdwatcher David Wilson deciding to undertake a big year in a small area.  After recently moving with his family to the Castlemaine area, David has taken on the challenge in 2017 as a fun way to get to know the forests, wetlands, waterways and other habitats of the shire.  As at the 22 February 2017, he had seen 104 different bird species.  Over the past four decades, the Castlemaine Field Naturalist Club members have recorded more than 230 species from the shire and surrounds – although many of these were very rare visitor or accidental vagrants, and not all within the shire boundaries.  At least one species has gone extinct from the local area in this time – the last known Grey-crowned Babblers from the shire sadly disappeared in the early 2000s. David is not sure how many species he will get within the year – but an impressive 200 species seems within the realms of possibility.

If you would like to see how David is tracking, the rules he has set himself, which species he has seen so far and where, and what he has left to go – you can visit his website (click here – scroll down on each webpage to see the details).  David has also asked us to pass on the following message – “‘As the end of the year gets closer, I’ll be looking for any hints on where to find those missing species. So keep your eyes open – you may know where a key species is that I still need to see”.