Posted on 7 March, 2017 by Connecting Country

For this month’s Nature News, on page 36 of the Midland Express (7th March 2017), Forest Creek resident and Connecting Country’s Works Crew team leader, Fritz Hammersley describes nature’s response to a wet spring through the dry of summer in the Forest Creek catchment.

Last spring, we had to abandon the car late one evening on one side of a rapidly rising Forest Creek. We threw some things to the opposite side, tied others to our shoulders and crossed the knee-deep torrent. 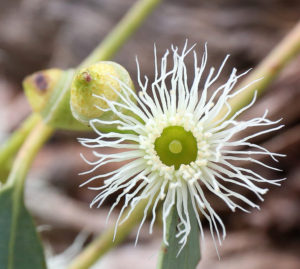 Our valley is pocked with dredge, sluice and gravel pits from the gold rush. They quickly filled when the creek burst its banks. As the flood receded, the pits became isolated blackwater lagoons saturated with decaying litter, hostile to gilled creatures but no barrier to air-breathing larvae like mosquito. Lizards arrived for the bounty.  Five Sacred Kingfishers, Todirampus sanctus, flitted around one low-hanging branch for a couple of months, feasted and moved on.

An unusual patch of Bracken Fern, Pteridium esculentum, commonly seen in wetter climates, sprang to life. Like Coffee Bush, Cassinia arcuata, it will recruit after good rainfall or become denser after fire. Both will eventually out-punch pasture grasses until  acacias and eucalypts overshadow and calm them. In the forest these plants know their place, but on cleared land the sky’s the limit.

A Mud-dauber Wasp, Sphecidae sp., built a house in my bookshelf with a dried mud paste. She placed a paralysed Orb Spider, Araneus sp., in each cell and laid an egg on it. The hatchling feeds on the body juices of the spider, leaving only its exoskeleton amongst the shards of its dusty tomb.

Suddenly in the bush this summer we get a faceful of spider’s orbs every time we walk in the bush! Some are preposterous with ridiculous anchoring spans of five metres plus, others opportunistic, like the spider that positioned its orb outside our beehive and couldn’t keep up with the harvest.

Now in this dry summer Yellow Box, Eucalyptus melliodora, found slightly upslope from the creek flats, creates a park-like atmosphere above the dry grass with verdant new growth. Within it the profusely flowering Box Mistletoe, Amyema miquelii, is abuzz with bees. Lilies and orchids may  respond to the spring floods of 2016 with a greater floral display next season, there will be fewer mosquitoes around, and eventually this marvellous boom will peter out.