For this month’s Nature News, Newstead naturalist and photographer Geoff Park writes about the feathered migrants that are characteristic of our region in the summer months. This article was featured in the Midland Express on November 7, 2017.

Sacred Kingfishers are one of my favourite spring migrants, their loud ‘kek kek’ call may be heard anytime from late August around Newstead. The kingfishers return faithfully to favourite nesting sites along the Loddon River and in the surrounding forests. This species nests in earthen tunnels and tree hollows, with the first fledglings appearing around Christmas most years. Observers can delight in watching the kingfishers as they first stake out territories, refurbish nests and then commence feeding youngsters from late November onwards. The sight of Sacred Kingfishers bringing a selection of cicadas, yabbies, fish and reptiles to their hungry brood is one of the ‘sights of summer’.

My absolute favourite though is the Rainbow Bee-eater. This extraordinarily beautiful bird can be seen year round in northern Australia – but they are not the same individuals. Small flocks of Rainbow Bee-eaters make a twice yearly migration up and down the east coast, with some birds moving as far north as Papua New Guinea and New Caledonia. The birds we see around Newstead may well spend their winter on Cape York where they are replaced by international travellers during the northern summer, as the ‘Newstead’ individuals migrate south.

Rainbow Bee-eaters nest in small colonies, perhaps most notably near the Newstead Cemetery, but also at various locations along the Loddon River. The sound of the first trills of this species can be heard anytime from early October as they gather above their breeding grounds and make spectacular display flights. As spring progresses they descend to their tunnels, usually in a vertical bank of an eroded gully or riverbank and clean their nests in preparation for egg-laying. Not all nests sites are used each year, but some of these special spots must have been used for centuries by successive generations of magnificent ‘rainbowbirds’.

Other summer migrant specialties, such as the Square-tailed Kite, appear to be increasing in numbers.  Flocks of woodswallows (Masked and White-browed Woodswallows) arrived on the first warm northerlies in October. We can also expect to see waders arrive from the northern Hemisphere, such as Red-necked Stints and Sharp-tailed Sandpipers. These tiny birds use Cairn Curran Reservoir (most years) and the Moolort Plains wetlands (if they are wet!) to fuel up before flying 10,000 kilometres back to their Siberian breeding grounds!

Look out too for the rarities that may visit each summer. Last year we had a Common Koel in Newstead and this year a spectacular small red honeyeater known as a Scarlet Honeyeater has been visiting the region in unprecedented numbers. 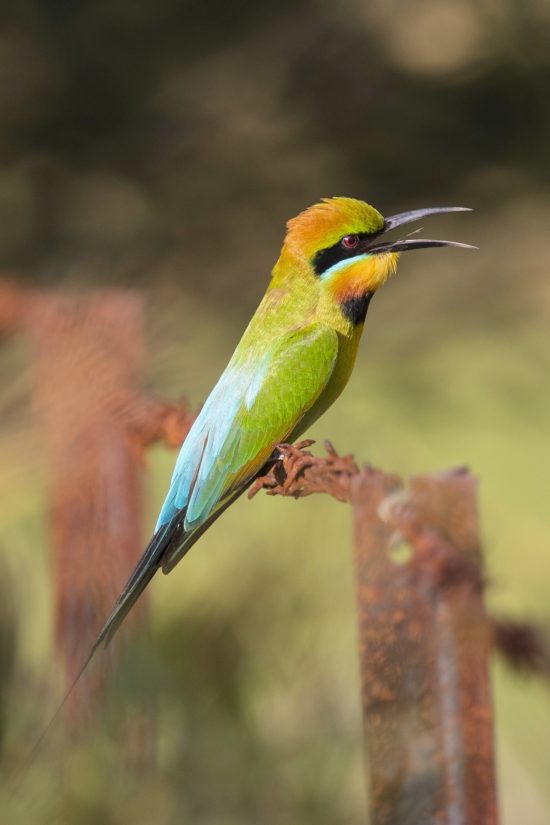