Unfortunately a large area of established revegetation of local native plants was cleared this week in Maldon.

The revegetation site is located on the northern end of the former South German Mine in Phoenix Street, Maldon VIC. Maldon Urban Landcare Group (MULGA) successfully revegetated the site as part of a larger long-term restoration project to restore the site that began in the 1990s.

An article about the revegetation site and the project was published in the 2015 Victorian Landcare and Catchment Magazine. To view the article – click here

The northern end of the site has now been groomed and almost entirely cleared of vegetation. We understand the area was cleared by an operator under the direction of Parks Victoria, who are responsible for managing the land. MULGA were not informed or consulted about this action.

Naturally, MULGA members have expressed their distress, frustration and disappointment that this has happened. Local Parks Victoria staff are in contact with MULGA regarding their concerns.

MULGA is one of Victoria’s oldest Landcare Groups. They are well respected and known as a hardworking, dedicated group of volunteers who put a huge effort into restoring the degraded reserves around Maldon. To learn more about MULGA’s work – click here 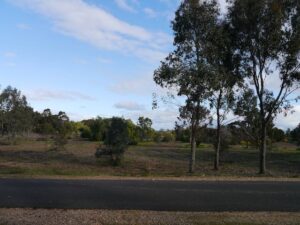 Site at former South German Mine in Phoenix Street, Maldon in August 2020