Our colleagues at the Australian Platypus Conservancy published the following update on progress following the ban on opera house yabby nets. Evidence so far indicates the ban is working to reduce platypus and rakali deaths caused by these nets. Please read on for details. 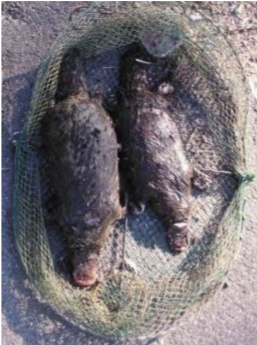 Since 1 July 2019, the Victorian government has banned recreational use of opera house traps and other enclosed nets to capture crayfish or yabbies in all public and private waters throughout the state. The new rule aims to reduce the number of platypus, rakali (or water-rats), turtles and other air-breathing animals drowning as bycatch in enclosed traps. So how successful has this move been in reducing deaths of non-target species?

Based on records collated by Mike Sverns (DELWP Major Operations and Investigations Unit), only one platypus reportedly died in an opera house trap in the first 18 months after the Victorian ban was implemented (in King Parrot Creek in September 2019), with two rakali mortalities reported in the same period (in the Barwon River in April 2020). On average, eight times as many platypus and four times as many rakali reportedly died each year in enclosed traps set in Victorian waters in the 36 months preceding the ban.

It’s also worth noting that the ban on opera house trap use has been strongly supported by nearly everyone in the Victorian community, including recreational angling groups. To encourage persons to make an early switch to wildlife-friendly open-top yabby nets, the Victorian Fisheries Authority funded a Yabby Net Swap Program, whereby anglers could swap up to three opera house traps for one open-top yabby net. This program was very successful, with 20,000 open-top yabby nets distributed to persons across the state between December 2018 and February 2019.

Legislation banning use of opera house traps in the Australian Capital Territory came into effect in 2020. The ACT also followed Victoria’s lead in announcing that opera house traps could be exchanged for open-top lift nets at participating fishing tackle shops (with a limit of two new free nets per person). Elsewhere in Australia opera house traps cannot be legally deployed in Tasmania or Western Australia. New South Wales has announced they will eventually be banned throughout the state but (as far as we know) still hasn’t seta date for this to occur.

Even though Victoria’s ban has been an unqualified success in many ways, some illegal usage is likely to continue for some time due to the huge numbers of opera house traps that were previously purchased. More than 60 enclosed nets have been seized by Victorian fisheries and wildlife officers since mid-2019, including 23 opera house traps confiscated from a single person, resulting in a substantial fine. Unfortunately, it could be many years before these traps finally disappear from Victorian waters, as illustrated by a drum net being removed from the Goulburn River in May 2020, two decades or more after its use was outlawed.

Therefore, please continue to watch for use of illegal yabby traps and nets and report them at once to your state/territory fisheries hotline (13FISH in Victoria). Also, do whatever you can to encourage New South Wales, Queensland, South Australia and the Northern Territory to take action to ban all use of enclosed yabby nets and traps within their respective borders.