We recently received a great article from the newly formed ‘Wetland Revival Trust‘, highlighting our beloved Eltham Copper Butterfly and the search for new habitat in our region. The trust has been setup by Damien Cook and Elaine Bayes, who are co-directors and ecologists at Rakali Ecological Consulting, which has been operating since 2012. The article gives us hope, that threatened species can return from the brink, with support from the community and government, and adequate habitat managed for its ecological values. Please enjoy the article below, developed by Connecting Country on behalf of the Wetland Revival Trust.

The endangered Eltham Copper Butterfly (Paralucia pyrodiscus lucida) represents one of the most fascinating stories both due to its co-dependency in nature and how people have rallied for this species.  This is a rare, good news story within the extinction crisis across Australia, proving we can save species from the brink with the right care and resources.

It is a story of lost and found and lost and found again. The little butterfly was formally described in 1951 having been collected from several sites around Eltham (then north east of Melbourne) during 1923-56.  Subsequent lack of records over the next 37 years, combined with vegetation clearing for housing development where they once thrived (Tallarook, Murtoa, Dimboola, Keilor, Broadmeadows and Yarrambat), lead scientists to conclude the butterfly had become extinct. Then the butterflies were rediscovered at Eltham in 1987 on a property about to be subdivided. Community campaigning for this tiny insect resulted in the purchase and protection of eight hectares of land around Eltham and Greensborough. The 1987 discovery also triggered funding of a state-wide search. Nine colonies were discovered in 1988, including two in new regions: Castlemaine (central Victoria) and the Kiata-Salisbury area (western Victoria).

Finding where a threatened species lives is the first step in conserving it, but protecting it from threats is the key to survival.  Sadly, since 1988 three known populations were lost through housing development in Melbourne’s north eastern suburbs (Montmorency and Eltham) and from grazing and weed invasion in western Victoria (Salisbury).  It is likely that butterfly populations were also lost from other areas where they were not yet discovered. 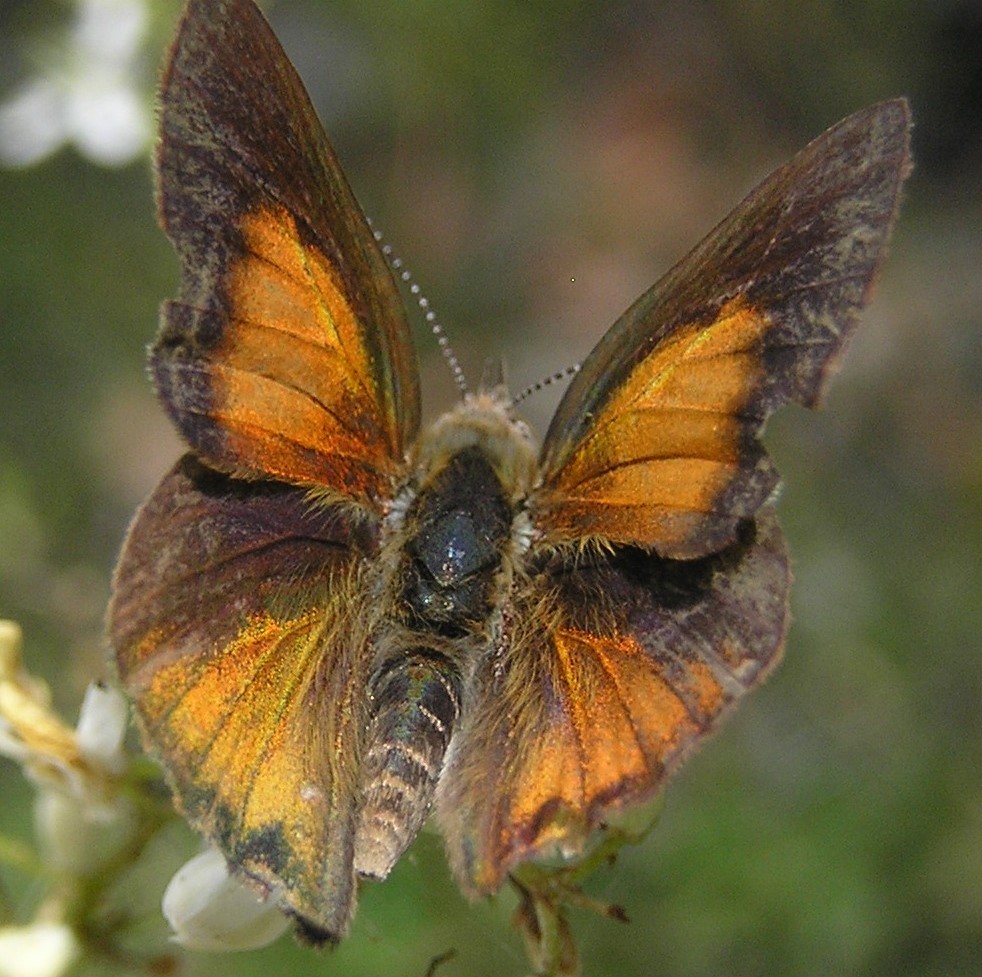 However, bursts of effort over the decades have led to the discovery of new populations, mostly in north central Victoria. In 2011, a 3,000 ha search found eight new populations around Bendigo and Castlemaine.  All the newly-discovered populations are very localised. Although the populations are located within a larger area of what looks like suitable butterfly habitat, the butterfly only occurs in 3-25% of habitat. Numbers of butterflies within these areas are also small, with populations of around 50 butterflies peppered across an area.  Why they are found in some areas and not others is unclear, and what makes good butterfly habitat appears very complex.

Eltham Copper Butterfly is a small attractive butterfly with bright copper colouring on the tops of its wings and lives in dry open woodlands. A member of the blue butterfly family, it has a fascinating ecological dependency with two other species – a Notoncus ant and the Sweet Bursaria plant (Bursaria spinosa), which is the sole food source for the butterfly larvae. It’s survival also relies on an unknown array of environmental factors including availability of food for the ants, relationships with predators, site aspect and soil type.

The symbiotic relationship works like this. The adult Eltham Copper Butterflies lay their eggs on or at the base of Sweet Bursaria plants. The eggs hatch and the larvae make their way to the ant nest where they are tended and guarded by Notoncus ants.  This amazing service is achieved through a mixture of trickery and treats. Trickery in that the larvae of this family butterflies are believed to give off chemicals and make noises that can pacify ant aggression, mimic ant brood hormones, and attract and alert ants if the butterfly larvae is alarmed. Treats in that the butterfly larvae produces sugary secretions from their body in proportion to how many ants they need to guard them. These nocturnal ants then lead the butterfly larvae out at night to browse on the Sweet Bursaria leaves, and defend them from the many nocturnal predators that see the larvae as a juicy snack. Larvae pupate in or near the ant nest, with adult butterflies emerging from October to March each year, peaking from November to January. The adults then feed on nectar of Sweet Bursaria flowers, before they lay their eggs at the base of the plant, and on the cycle begins again. 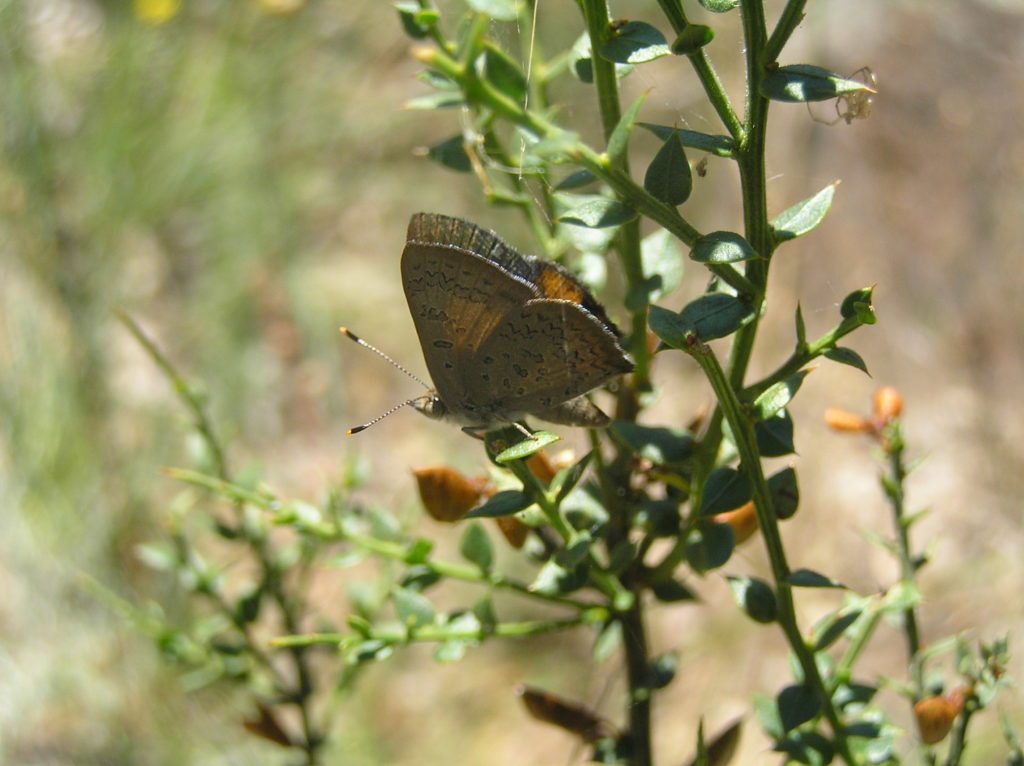 Elaine Bayes is one of the leading ecologists championing the future survival of the Eltham Copper Butterfly in northern Victoria. Elaine has conducted numerous surveys for the butterfly and its preferred habitat over the past decade, along with her colleague ecologist Karl Just and a team of citizen scientists, uncovering new populations along the way. Elaine recently obtained funding through the Victorian Government’s Biodiversity On-ground Action Program to map and monitor current known populations, and conduct further surveys for suitable habitat across central and western Victoria. Elaine is excited about the chance of finding further populations of the special butterfly. ‘We have the opportunity to conduct surveys in locations that we have not previously surveyed, but we know have great habitat potential. The next six months will see our team survey locations around Castlemaine, Chewton and Kiata, with the hope of discovering new populations, which is very exciting and vital to the survival of this endangered species.’ noted Ms Bayes.

Although there are several known populations around the state, the future of this special butterfly remains uncertain. It is listed as threatened under the Victorian Flora and Fauna Guarantee Act 1988 and as endangered under the Commonwealth Environmental Conservation and Biodiversity Act 1999. This places considerable importance on managing the small number of known population sites and locating any potential new sites so they can be protected from threats.

‘Land clearing and fire are two of the main one threats to this species. It is critical that we search for unrecorded populations so they can be protected, particularly from planned burns. The habitat around butterfly populations is vital and must be protected from over burning for the butterfly and their complex ecological relationships to survive,’ said Ms Bayes. Recent surveys from ecologists and the community have resulted in important changes to fuel reduction burns, allowing land managers to still reduce fuel load but ensure vital habitat is maintained for butterfly breeding. 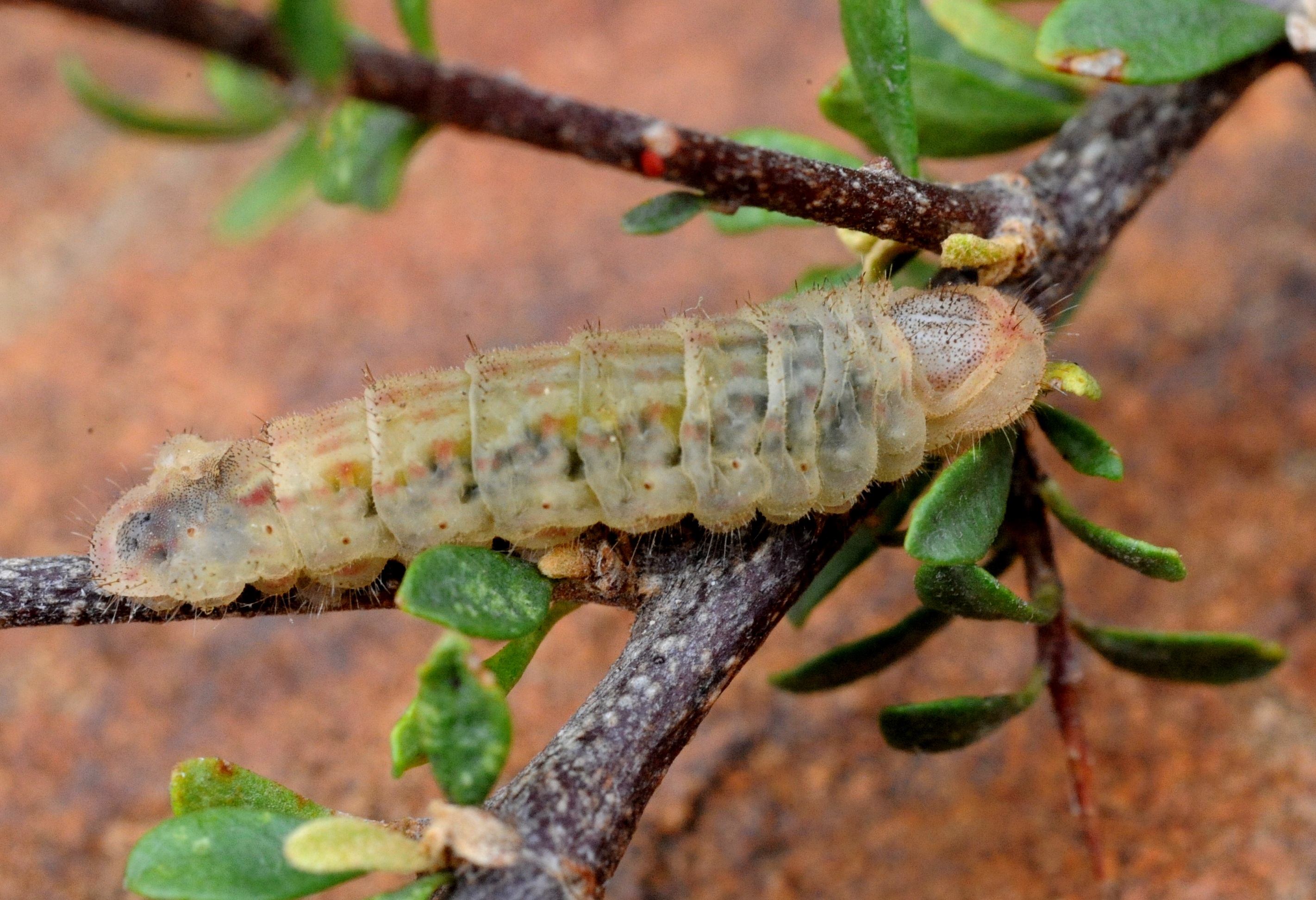 How can you help?

To contribute, get involved in the protection, conservation and management of remnant bushland on your property or in your local area, as there are increasingly rare and threatened species living within them. In particular, retain and restore any native understorey plants on your property, and if appropriate to your area, plant Sweet Bursaria.

For updates about the butterfly population in Eltham-Greensborough and associated volunteer events, there is a Facebook page – click here

For the Eltham Copper Butterfly populations in northern Victoria, get involved locally in management, monitoring or raising awareness. From early November to January, walk through areas where Sweet Bursaria grows and look for the copper sparkle of flying adult butterflies.

You can report sightings of this elusive butterfly on the new and amazing Butterfly Australia App. For information visit – www.butterflies.org.au