Bird of the month: White-faced Heron

Welcome to our 28th Bird of the month, a partnership between Connecting Country and BirdLife Castlemaine District. Each month we’re taking a close look at one special local bird species. We’re excited to join forces to deliver you a different bird each month, seasonally adjusted, and welcome suggestions from the community. We are blessed to have both the brilliant Damian Kelly and talented Jane Rusden from BirdLife Castlemaine District writing about our next bird of the month, accompanied by their stunning photos.

While walking and discussing birds and cameras with Damian Kelly and Ash Vigus, whom regular readers will know as extremely talented and knowledgable on both those topics, we spotted a White-faced Heron with a stick in its bill. Sure enough, it was nest building with its mate, high up in a tall Pinus halepensis, in the beautiful Castlemaine Botanical Gardens.

High in a tree is a classic spot for them to build their messy pile of sticks lined with smaller twigs, that somehow works as a nest. Favoured sites are near water and therefore a food source, even when these same sites are popular with human visitors. As a large blue-grey bird with it’s distinctive white face, normally seen stealthily stalking invertebrates and frogs in shallow water or mud flats, they can look a bit incongruous in a tree. 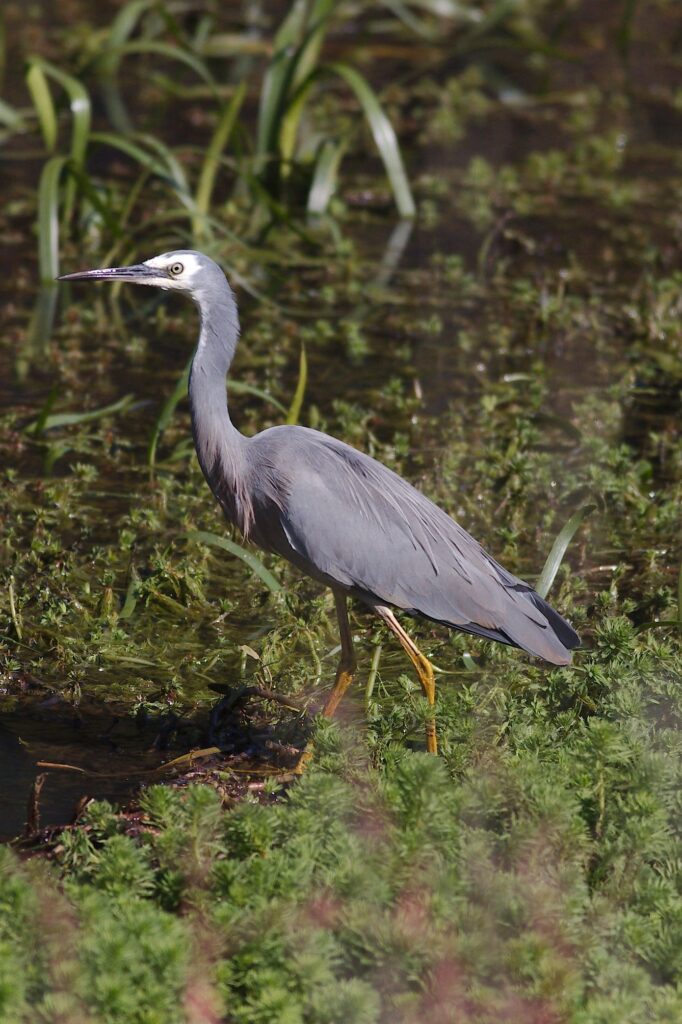 Usually they are seen as single birds, who may have become resident at a dam or other food source for a long period of time. However, during the breeding season and for a while afterwards, family groups will form feeding parties and work their way across a paddock or irrigated farmland, searching for frogs and insects. During breeding, both sexes incubate and feed young. Clutch sizes are usually 2-3 chicks, and once fledged the young will stay near the nest site while the parents feed them.

The call of the White-faced Heron is slightly scary in my opinion, and not what you’d expect from such an elegant-looking bird. It is harsh and guttural, often heard while the bird is flying overhead. Usually, they are silent, as you’d expect from a bird that stalks its food, and relies on stealth and surprise to snatch a meal. 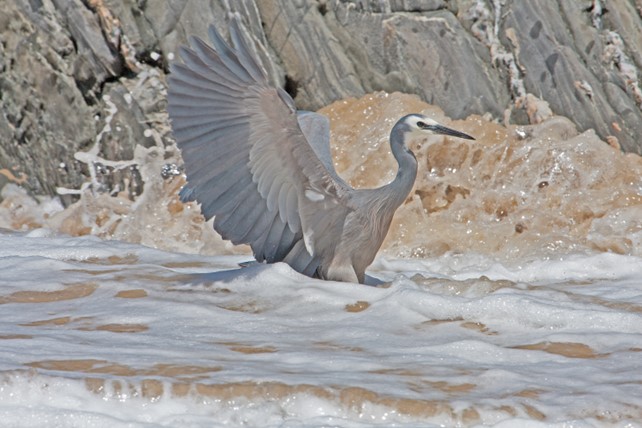 A White-faced Heron ‘surfing’ in the shallows. Along the coast they will hunt in rock pools, artfully dodging waves as they work the shore. (photo by Damian Kelly)

White-faced Herons are one of a small bunch of species that may have benefitted from land clearing and deforestation. They have adapted to using man-made or altered water sources for feeding, probably because they were already adapted to using a variety of fresh and saline habitats to hunt for food. Basically, if it’s got water, they will stalk it for tasty morsels such as fish, crustaceans, worms and other smaller creatures of the animal kingdom. They do farmers a favour with their capacity to consume large numbers of crickets in pasture. Being such an adaptable bird, White-faced Herons can be found all over Australia (except in the central deserts), and in New Zealand, parts of Papua-New Guinea and various offshore islands.

To find out more about White-faced Herons, including their calls – click here

3 responses to “Bird of the month: White-faced Heron”

« 1,000 plants for climate change resilience | A chance to win plants for your next Landcare project! »