Bird of the month: Superb Fairy-wren

Welcome to our thirteenth Bird of the month, a partnership between Connecting Country and BirdLife Castlemaine District. Each month we’re taking a close look at one special local bird species. We’re excited to join forces to deliver you a different bird each month, seasonally adjusted, and welcome suggestions from the community. We are lucky to have the talented and charismatic Jane Rusden from BirdLife Castlemaine District writing about our next bird of the month, with assistance from the brilliant Damian Kelly and Ash Vigus.

My grandfather, Claude Austin, passed on his passion for birds and conservation to my very young eyes and ears. One of my earliest and ongoing observations was that, despite downsizing from farm, to rural home on acres, to house in the city, there were always Superb Fairy-wrens, also known as Blue Wrens, in his garden. And so it became a life goal for me to create safe and suitable habitat for these tiny but charismatic and adaptable birds in my own garden. These days, living on a bush property, they provide a daily delight as they robustly sing to the world with all their might, jump over each other like circus tumblers and snuggle up in gorgeous family groups. However, I doubt that in his day, Pop knew of their saucy sex life. If he did he certainly wasn’t telling me.

Superb Fairy-wrens love dense bushes. They sing from the highest point and dive into them for cover from predators, while using the surrounding open ground to forage in a social unit, at a frenetic pace. Their diet consists of predominantly insects, but also flower petals and succulent fruits.

During spring and summer the male Superb Fairy-wren makes up for it’s tiny size, with vivid and iridescent blue and black breeding plumage making them quite conspicuous. However, during the non-breeding months they go through eclipse where they look quite motley, adopting mouse brown plumage like the female, but retaining the black bill and very dark blue tail. 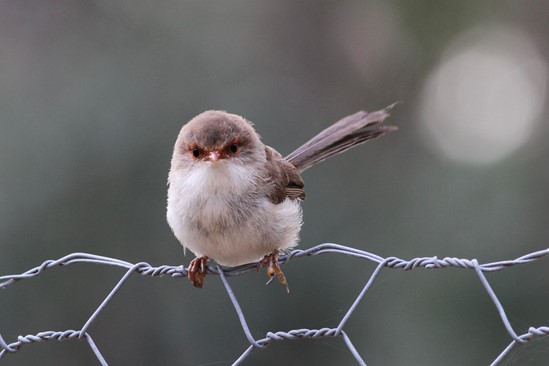 Damian Kelly’s discovered the following facts about Super Fairy-wrens during his research.

Generally you will see a male in company with a group of brown birds, both male and female. In the past this misled people into thinking that the male was polygamous and held sway over his ‘harem’.

This was all turned on its head by banding studies first by E and J Bradley and then Ian Rowley. What appears to be a territorial patriarchal group is in fact a matriarchal group. Groups comprise usually one coloured male, a bunch of brown males and one female. All birds assist in the feeding of the young. Any females hatched are driven from the group once mature.

To add to the intrigue, eggs in a nest are not all fathered by the coloured male – often separate eggs are fertilised by several different males. Various studies have found that over 40% of young in a territorial group were fathered by a male other than the dominant coloured male. This behaviour is true not only of the Superb Fairy Wren, but also the Splendid Fairy Wren.

BirdLife Australia’s ‘Birds in Backyards’ web page has this to say: ‘Male Superb Fairy-wrens have been labelled as ‘the least faithful birds in the world’. Females may be courted by up to 13 males in half an hour, and 76% of young are sired by males from outside the social group.’ 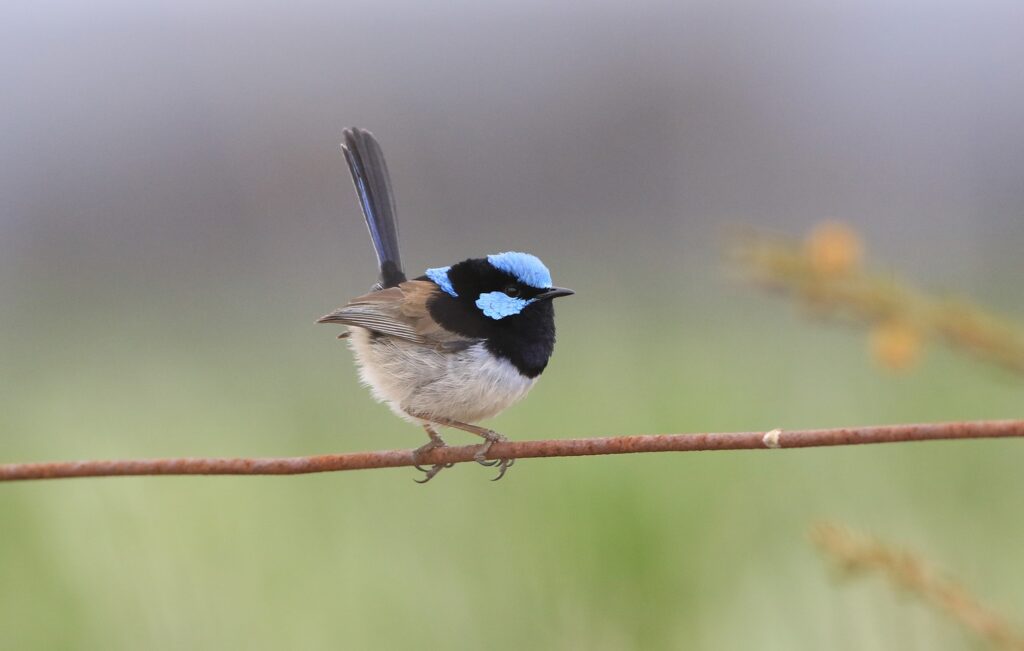 Superb Fairy-wrens can be parasitised at times by cuckoos such as Horsefields, Shining, Fantailed and Black-eared.

A big thank you to contributors to this edition of Bird of the Month – Jane Rusden, Damian Kelly and Ash Vigus – for their amazing knowledge and skills.

11 responses to “Bird of the month: Superb Fairy-wren”