Bird of the month: Rainbow Bee-eater

Welcome to our eleventh Bird of the month, a partnership between Connecting Country and BirdLife Castlemaine District. Each month we’re taking a close look at one special local bird species. We’re excited to join forces to deliver you a different bird each month, seasonally adjusted, and welcome suggestions from the community. We are lucky to have the talented and charismatic Jane Rusden from BirdLife Castlemaine District writing about our next bird of the month, with assistance from the brilliant Damian Kelly and Ash Vigus.

Sun lighting up this bird’s feathers to iridescent rainbows is a wonder of the natural world. The Rainbow Bee-eater is arguably the most vibrantly colourful bird of our region in Central Victoria, and it literally lives up to its name both in vivid plumage and diet. While species of Bee-eaters are found world-wide, our one species spends the winter in Northern Australia, then in spring flocks head south, heralding warmer temperatures to come. Newstead cemetery is a local bird hotspot where they breed and can be found until around the end of March, and sometimes into April.

As their name suggests, the Rainbow Bee-eater dines on bees … and wasps, as well as less dangerous prey such as dragonflies, butterflies and other flying insects. The bird will perch up high, waiting until it can make a dashing flight after airborne prey. If it’s an insect with a sting, they will return to their perch and employ ‘bee-rubbing’, a technique where they hold the insect across the bill tip and rub it’s sting out on their perch, before safely swallowing. On occasion they will also forage on the ground or from foliage.

Males are slightly larger and more colourful than females, and have an obvious tail streamer. After migration in large flocks, small groups will splinter off and monogamous pairs will nest in a small colony. Young males hatched the previous year often help parents feed hatchings. 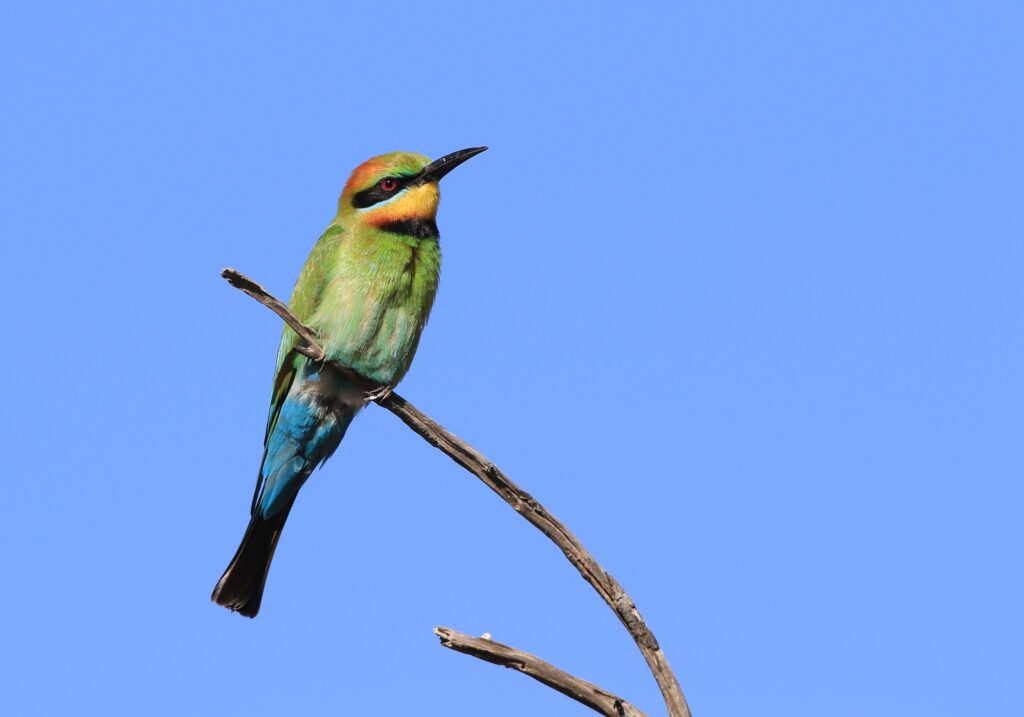 For such a pretty bird, they have what may be surprising nests. I’d be head to toe in dirt if I had my babies in a tunnel, especially if that tunnel was 40 – 150 cm long, and as a female, I’d be the one doing most of the digging. They favour sandy soil or clay banks, in flat or sloping ground, in which to construct their nest tunnel with a chamber at the end. Eggs may be laid straight on the earth, or the chamber lined with grass and feathers.

Usually I’m alerted to Rainbow Bee-eaters by their call. A glance skywards and there you will see them soaring around on extended wings, much like woodswallows do. When lucky, you may observe ‘plunge bathing’, where they fly above water, suddenly dive with a splash, and fly straight to high perch to preen wet feathers. With their graceful flight and gorgeous colours, they never cease to give me a thrill. 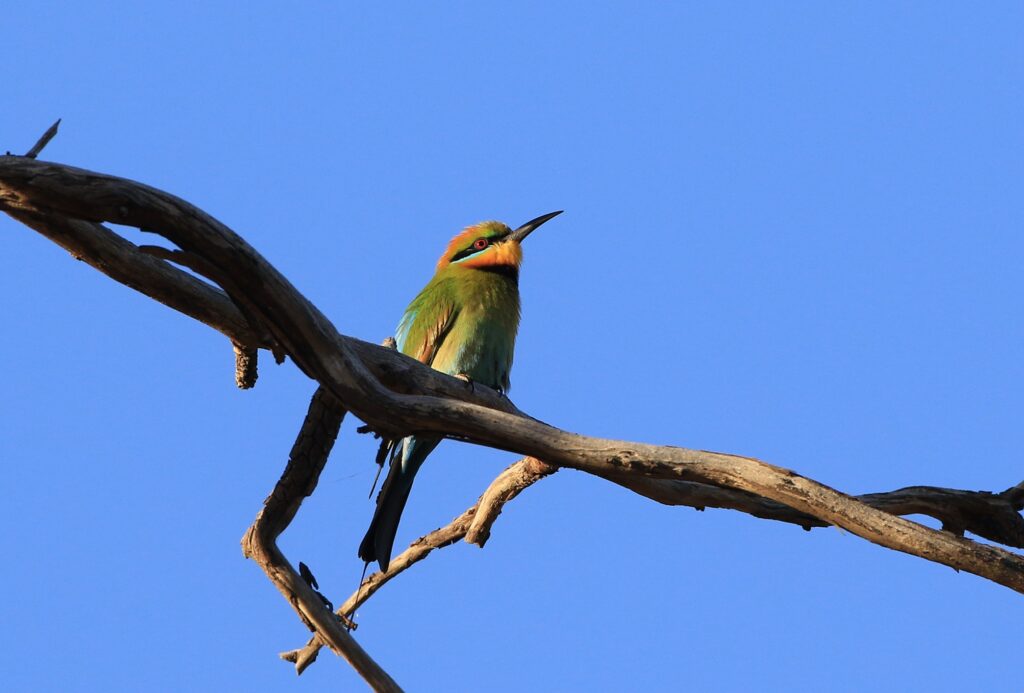 A big thank you to contributors to this edition of Bird of the Month – Jane Rusden, Damian Kelly and Ash Vigus – for their amazing knowledge and skills.