Bird of the month: Long-billed and Little Corella

Welcome to our 26th Bird of the month, a partnership between Connecting Country and BirdLife Castlemaine District. Each month we’re taking a close look at one special local bird species. We’re excited to join forces to deliver you a different bird each month, seasonally adjusted, and welcome suggestions from the community. We are blessed to have both the brilliant Damian Kelly and talented Jane Rusden from BirdLife Castlemaine District writing about our next bird of the month, accompanied by their stunning photos.

The story of Corellas in Australia is one of boom, bust and boom. And along the way some hard lessons have been learnt about misguided control measures that had exactly the opposite impact to what was intended.

Back in 1878 in the Kimberley in Western Australia one estimate put a flock of Little Corellas at 50,000 birds. The noise of their calls was unbearable as anyone who has been close to a flock would appreciate. Many very large flocks have been recorded across various parts of the inland.

The Little Corella has been used as a reliable guide to the presence of water by both the local Aboriginal groups and the later European settlers. Little Corellas are seldom found far from permanent water sources as they drink each day and occupy communal roosts near water in wooded farmlands, tree-lined water courses and nearby scrublands

Unlike northern Australia, in Victoria Little Corellas were first recorded in the dry north-west of the state in 1951. Steady expansion of their range occurred so that by the early 1970s flocks were common throughout the north-west. By 1978 they were recorded near Melbourne, probably assisted by accidental or deliberate releases of captive birds.

First records in Tasmania were in 1982, most likely from releases of captive birds. They experienced a spectacular spread in South Australia from the 1950s. Little Corellas have adapted with ease to the changing environment of farms throughout inland Australia.

Right from the early days they were kept as pets partly because they they are good talkers. There are even early records of some birds speaking in local Aboriginal dialects. They will readily breed in captivity and are also known to hydridise with Galahs and Pink Cockatoos in captivity. Hybrids with Galah have also been recorded in the wild

Long-billed Corellas originally were generally confined to south-eastern Australia. However, feral populations are now established in all states. They prefer wetter habitats compared to the Little Corella. 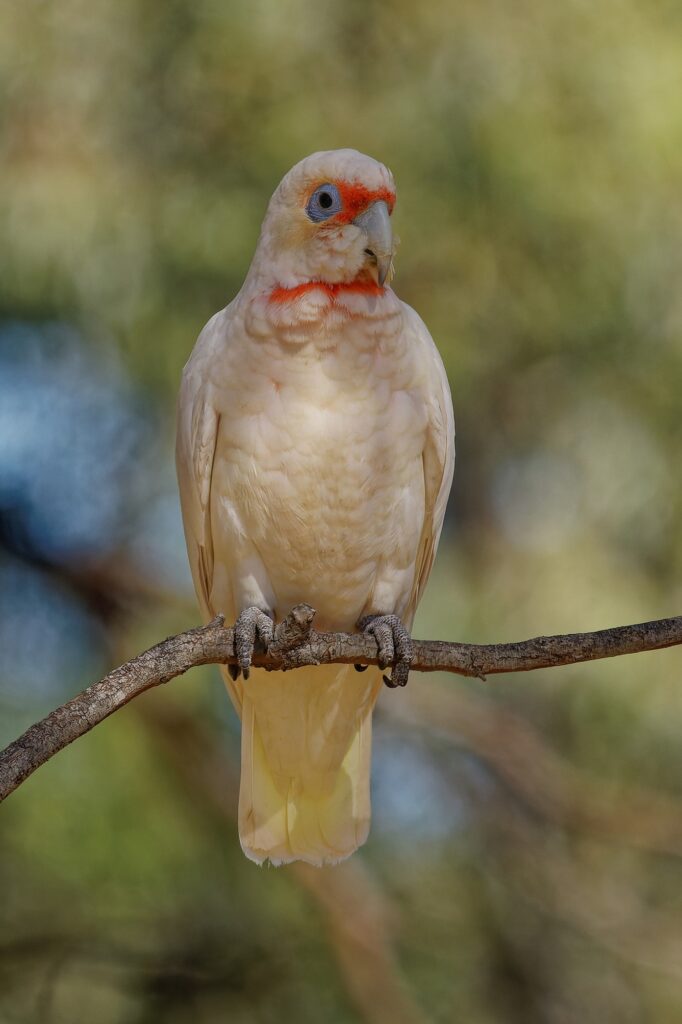 Long-billed Corella in the wild displaying the very long bill, pink face and stripe across the base of the neck (photo by Damian Kelly)

As a salutary lesson in messing with nature, in the early 1970’s large numbers of Long-billed Corellas were trapped by government agencies in grain growing areas. These birds were then sold into the pet trade. However, these wild birds proved to be totally unsuited to being pets and many were subsequently released, adding to feral populations. This impact of human intervention has only served to aid the spread of the birds. Big flocks continue to cause damage to crops in many areas as well as big roosting groups denuding their roost trees.

Life expectancy for both species is around 20 years with some individuals living much longer. So once a mob is established in an area they will be around for a long time.

Interestingly, Damian’s research lead us to the realisation that my sweet aviary rescue bird, ‘Bird’, may well have been one of the Long-billed Corellas captured in the 1970s. His language indicates he’s about that age … I won’t enlighten you on his full phrase, but ‘grouse’ is the cleanest word, a word commonly used in the 1970s. Also, his leg band indicates he was taken from a nest during a cull. 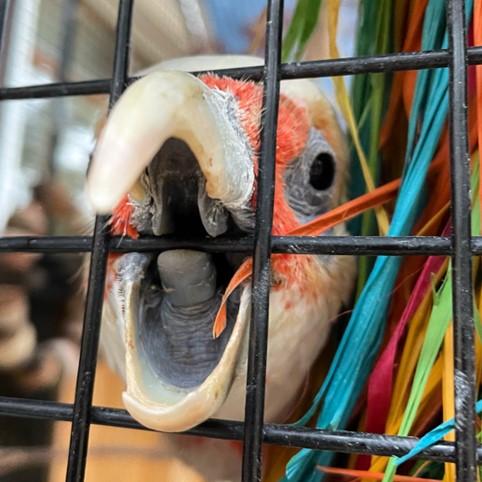 Bird, the Long-billed Corella aviary rescue, who wanted my phone as I photographed him! (photo by Jane Rusden)

Both Corella species are very long lived –  70 years is expected, hence they often outlive owners. This can be a problem as they are very emotional birds who can become very attached to their humans. Their needs are much like those of a human child, but they also have distinctly bird needs as well. If these are not met by their owners, it can lead to a miserable, and sometimes aggressive bird. They are intelligent and crafty. Bird is an excellent escape artist, requiring padlocks on his aviary, which he can open if a key is left in them.

‘Chookie’ is my Little Corella aviary rescue. He is charismatic, loving, has amazing language, and is very adept at undoing quick links. He bites with pressures over 300 pounds per square inch (PSI). Despite trying, I can’t meet his needs and have the physical scars to show for it. He is about to join a large aviary flock, where we hope he will be happier with a mob of his own kind. 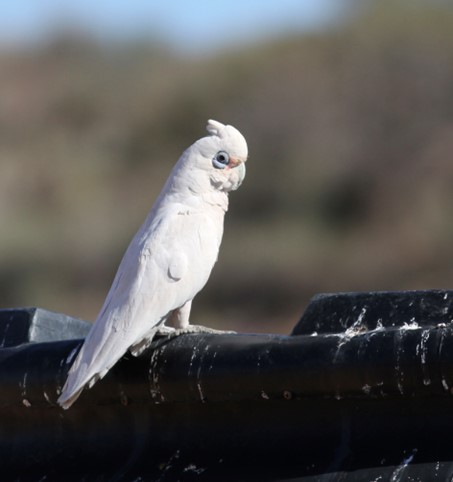 Little Corella, one of a small mob resident at an artificial water supply – a water tank in the South Australian desert – displaying the totally white bird, except for a blush of pink on the face, between the bill and eye (photo by Jane Rusden)