Bird of the month: Brown-headed Honeyeater

Welcome to our 29th Bird of the month, a partnership between Connecting Country and BirdLife Castlemaine District. Each month we’re taking a close look at one special local bird species. We’re excited to join forces to deliver you a different bird each month, seasonally adjusted, and welcome suggestions from the community. We are blessed to have both the brilliant Damian Kelly and talented Jane Rusden from BirdLife Castlemaine District writing about our next bird of the month, accompanied by their stunning photos.

Walking through Rise and Shine Bushland Reserve (Sandon VIC) in late August, with my camera in hand, I observed a honeyeater intently doing something in a bunch of leaves. I couldn’t see clearly what was going on until I got to study the photos. Turns out it was a Brown-headed Honeyeater in the very early stages of constructing a nest, using spider web and fleece from a sheep to build the anchor point from which the nest will hang. Thus, this month Damian and I bring you the Brown-headed Honeyeater.

In our region there are three fairly similar honeyeaters with white napes – the White-naped, Black-chinned and Brown-headed Honeyeaters. They are often tricky to identify without close views. The eyes have it, with White-naped having an orange eye ring, the Black-chinned with a blue eye ring and the Brown-head with a pale eye ring. In many ways the Brown-headed Honeyeater is a nondescript bird with grey and brown predominating. It favours upper foliage and you are more likely to hear it than see it. And there is the added complication that it can be mistaken for the young of the related White-naped Honeyeater.

I find the Brown-headed Honeyeater to be shyer and slightly smaller than many other honeyeater species. They tend to hang back at the bird bath and patiently wait until the brasher birds have finished splashing, shouting at each other (Fuscous Honeyeaters), and generally causing mayhem. Although a honeyeater, its diet primarily consists of insects and spiders, as well as nectar when available. Some studies have shown a pattern of about 35% nectar and 65% insects.

Communal behaviour is marked in the species, with them regularly travelling and foraging in groups. In winter family groups from adjacent territories often form large wandering mobs. Birds may preen each other and family parties often roost in huddles, usually in slender foliage near the tops of trees. Similar to other species that roost together, the Brown-headed Honeyeater huddles have the mature birds take up the outer perches with the young birds sandwiched in-between. Often adjacent birds face in different directions, which probably makes it easier to pack closer together as well as providing a wider view of possible predators. 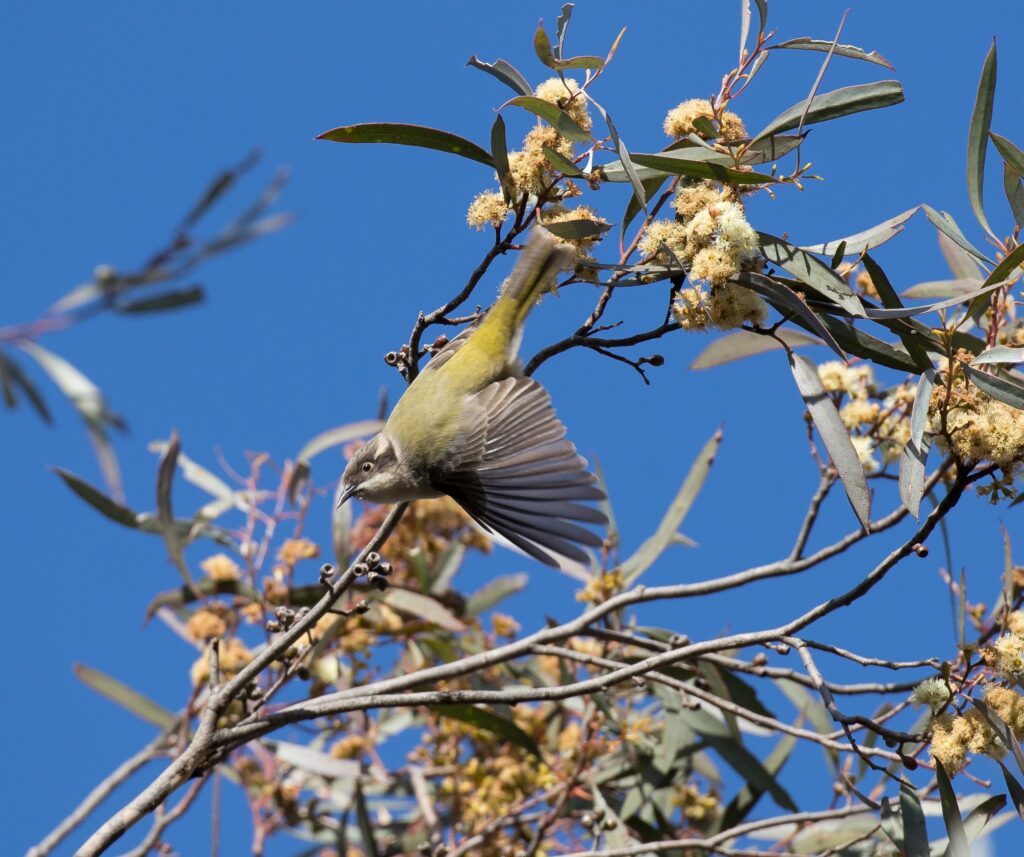 Nests are cup-shaped structures suspended from branches. Nesting is sometimes assisted by additional birds. The material mainly consists of spiders’ webs used to bind together such things as horse and cattle hair, and even Koala fur has been recorded. Strangely, cattle hair is usually from white animals not those with darker colours.

Two or three eggs are laid with incubation and feeding of young by both parents. One or more auxiliary birds may assist in incubation and the feeding of the young. Generally, this species moves within a large home range, with movements dependent on food availability. Bird banding studies have confirmed this, with the 99% of recoveries within 10 km of the banding site. Distribution is from southern Queensland through to Western Australia, mainly closer to coastal area and inland rivers.

Late winter and early spring are exciting times in the bush, with all sorts of breeding activities going on. Such a great time to stumble on interesting and curious animal behaviours. The following photos show a Brown-headed Honeyeater in the very early stages of nest building, high up in a Box tree. The anchor is being made, from which a cup-shaped nest will hang, hidden by leaves. 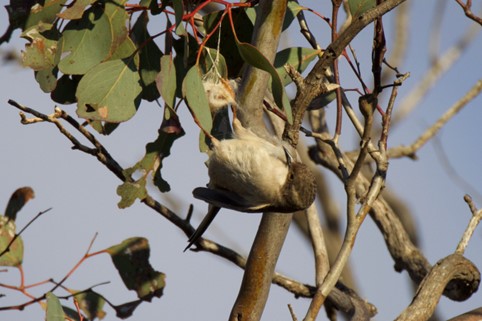 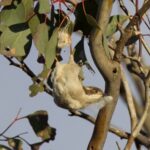 To listen to the brown-headed Honeyeater call – click here

3 responses to “Bird of the month: Brown-headed Honeyeater”