Wombat numbers on the rise

Coming home from work a week or two ago, I was just a couple of kilometres from my house. The car in front of me slowed to a stop. A medium sized mammal with a distinctly square bum ambled in front of their car and disappeared into the dark forest.
A wombat! A Common Wombat – also known as the Bare-nosed Wombat – in Porcupine Ridge! There are plenty of Wombats around Trentham, Glenlyon, and throughout the Wombat Forest, but in 15 years of living in Porcupine Ridge I had accepted the fact that while we have koalas, the wombats didn’t occur this far north. However, it seems the fortunes of wombats in western Victoria are changing!
In early 2016, a wombat caused quite a stir as it was photographed in the Gunbower forest, literally hundreds of kilometres from the nearest population. Peter Menkhorst, from the Arthur Rylah Institute was contacted to comment and he stated “The most westerly population of wombats on the Great Dividing Range is around Trentham and Daylesford, where the Campaspe begins”. He believed the wombat may have been an orphan pouch young that was released far from where it was rescued. Read the article in the Bendigo Advertiser here. 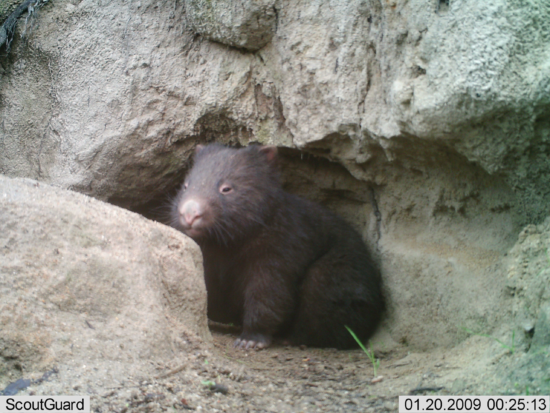 A healthy wombat, photographed by Connecting Country’s wildlife cameras at his or her burrow in Sutton Grange.  (Ignore the date on the photos – it was taken in 2014)

After seeing my Porky Ridge wombat, I searched online and found a fantastic website called WomSAT. This website is an initiative of the University of Western Sydney, and encourages people Australia-wide to record their wombat sightings. The map is really is easy to use, and enables you to note down whether the wombat was dead or alive, and if it suffered from mange. You can also record burrows. The WomSAT website can be accessed here.

On this map, there were at least eight sightings of living wombats between Bendigo and Daylesford from 2015- 2016, in Harcourt, south of Bendigo in Sedgwick and a big concentration in the Baynton area to the east.

I had a chat with my Connecting Country work colleagues Bonnie and Jarrod who have been documenting an increase in wombat sightings all through the Harcourt and especially Sutton Grange area – one property had a network of burrows with 50-60 entrances! 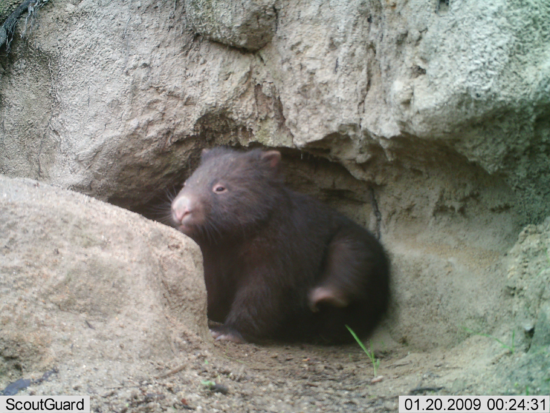 The same wombat having a little scratch

So what is going on?! My Mammals of Victoria book, also by Peter Menkhorst, states that wombat distribution on a local level is ‘probably most dependent on the availability of suitable burrow sites in association with food supply’.  The wombats do not like very dense forest, but any open habitat seems to do – with habitats ranging from alpine heathland, to wet forests, dry forests and coastal scrub and tea tree heath. Most of the burrows noted by Bonnie and Jarrod have been on creeklines which are tributaries of the Coliban River, and surrounded by open forest or woodland.

Wombats were declared vermin in 1906, and there was a bounty on them from 1925 – 1966. This put the already diminishing western Victorian populations on an even deeper downward spiral and they disappeared from the volcanic plains and indeed, anywhere north of the Great Dividing Range.

Anecdotally, the recent increase in wombat numbers has been noticed after the Redesdale fires in early 2009, part of the devastating Black Saturday fires. The fires may have caused a dispersal of the wombats into previously unoccupied territory.

So if you are in open forest along a creekline north of Daylesford and south of Bendigo, keep an eye out, a wombat family could be your new neighbours!

If you are logging sightings on WomSAT or sending us in a sighting on our Special-Species-Sightings-Sheet-2017, make a note whether the Wombat is healthy or not. Sarcoptic mange is a hideous parasite that Wombats catch from foxes. The mites cause the most severe mange affected skin and swelling around the eyes – and the wombat gets very sick indeed, and eventually dies. More information on wombat mange can be found here. Happily,  wombat lovers and advocates have discovered that they can add a pesticide ointment to a flap on an affected wombat’s burrow and this treatment saves the wombat without it having to be captured and taken to a shelter.

10 responses to “Wombat numbers on the rise”