Our region of central Victoria is home to numerous raptors, particularly in the vast plains to the north and west of Castlemaine, where species such as Whistling Kite, Black Kite, Brown Falcon, Kestrel and Black-shouldered Kite hunt the plains and farmland. Raptors are near the top of the avian food chain and feed on a variety of mice, rats, birds and native marsupials, as well as various roadkill species. They are excellent hunters, as well scavengers, and are often seen perched on dead trees and fences, eyeing off prey in the grasslands and pastures.

Local ecologist and author Damien Kelly has produced an excellent overview of raptors in our region. To view – click here

We were surprised by recently discovering a collection of images from a local resident, which showed a Whistling Kite grasping a captured Brush-Tailed Phascogale (Tuan). The photos show the brutal reality of the food chain and the incredible hunting skills of the Whistling kite. The photographs were taken by Helen McGeachin, and have been published here with her permission. Helen took the photographs a few years ago (June 2013) when she was working in her workshop in Elmtree Lane, Chewton VIC and looked up to see the kite (with poor little Tuan in hand ), which had landed on a nearby fence post. 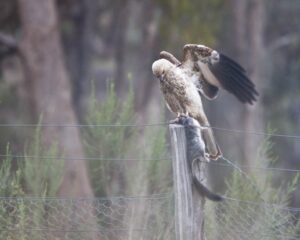 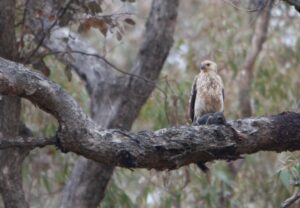 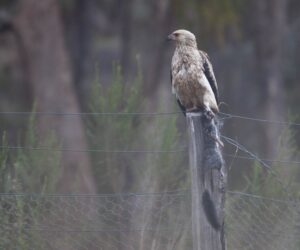 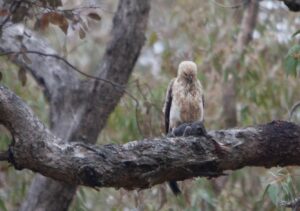 The Whistling Kite is a medium-sized raptor (bird of prey) with a shaggy appearance. It has a light brown head and underparts, with pale streaks, and dark sandy-brown wings with paler undersides. The underwings have a characteristic pale ‘M’ shape when open. The head and body are relatively narrow and the tail is rounded. The wings are long and well-rounded, with a wingspan of 120 cm to 145 cm.

They are often seen near water or around farms, soaring in a lazy circling flight pattern. The distinctive call of the Whistling Kite is, unsurprisingly, a clear whistle, which begins by descending down the scale, followed by an up-scale staccato chatter, given by birds as they fly overhead or when perched. During the non-breeding season, they mainly eat carrion, but during the breeding season, they take live prey, especially rabbits and hares, as well as fish, reptiles, birds, small mammals and invertebrates. They sometimes attend fires to catch fleeing prey, and they may steal food from other birds of prey.

To hear the call of the Whistling Kite – click here