Walking with the sound turned up: listen to the bush

This blog post was kindly written by Jess Drake as a reflection on Andrew Skeoch’s talk at Connecting Country’s 2019 Annual General Meeting. Jess Drake is a local soil and land scientist. Thank you, Jess!

The day after Connecting Country’s event I did one of my usual forest loops in the Castlemaine Diggings National Heritage Park without my headphones on. Andrew Skeoch had reminded me of the value of listening to the forest. This time I tried to follow Andrew’s four perspectives of listening while out walking.

His first perspective was using sound to identify species. I remember around this time last year I could hear frogs in the man-made dams in the bush. One of them is completely dry this year, and there was a clear absence of any Pobblebonk or Common Eastern Froglet that I heard in abundance last year (click here for details).

The second perspective of listening was sentience – communication between animals. I have a soft spot for the boisterous calls of the teenage White-winged Choughs. I love seeing and hearing packs of choughs causing complete upturn of forest litter layer, squawking at the top of their lungs. They seem to be chattering about their mischief or discovered treasures. The only break from their boisterous chatting seems to be when they see me getting that bit to close and a loud alarm goes off as they fly up into the trees, whilst seemingly agitated by being caught-out mid-fun. 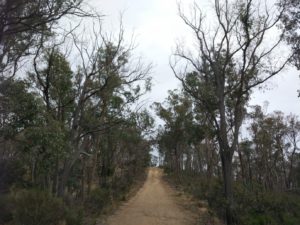 Ecosystem function was Andrew’s third perspective – using sound to understand the type of ecosystem you are in. One thing I noticed on my walk was instead of a rustle of leaves, I mostly heard the cracking and crunching of branches. As I looked up into the canopy on the ridge line, I noticed it was a bit thin. Many of the trees didn’t have leaves. Perhaps something is affecting the forest function?

The final perspective was evolution, where sound can reflect time. Andrew gave a few examples including about why cicadas sound has evolved to the cacophony we hear today.

Not being an ecologist, I thought about the sounds coming from the earth. As I accidentally kick a rock and it makes the thunking noise downhill, I imagine the sound of mass erosion during a thunderstorm, or the sluicing of mined materials during the gold rush. I imagine the loud explosions of volcanic eruptions that formed Lalgambook/Mount Franklin, as the country evolves over millions of years.

Andrew’s key message was really about listening both ways – us listening to the forest and the forest listening to us and revealing itself. He talked about using sound to learn about the conservation of our ecosystems. Sound in the forest is something that I personally had taken for granted (with my headphones on), but I certainly won’t again. I do like the chattering of the choughs after all!

3 responses to “Walking with the sound turned up: listen to the bush”