The wellbeing benefits of being a Landcarer

The Mount Alexander region of central Victoria is blessed with around 30 active Landcare and Friends groups, representing an extremely high level of community involvement in the Landcare movement.

Being a Landcarer can be extremely hard work, but there are also many rewards. There is the satisfaction of contributing to a healthy landscape, and creating habitat for native plants and animals. We also recognise there are benefits from connecting to the land, meeting people, making social connections and learning new skills. New research now shows Landcare can also improve personal wellbeing.

For decades, people involved in Landcare have testified to a greater sense of self, both physically and mentally, resulting from closer links with their local community and environment. This, in turn, has boosted community wellbeing and it has long been the desire of the Landcare movement to quantify the significance of these benefits.

Now, Landcare Australia has published findings by KPMG Australia, indicating Landcare volunteers enjoy substantial improvements to their mental and physical wellbeing – with a significant decrease to their healthcare costs!

Surveying more than 1,000 Landcare volunteers and coordinators from Landcare groups, the findings in the report, titled Building resilience in local communities: The wellbeing benefits of participating in Landcare suggest substantial improvements in wellbeing owing to involvement in Landcare lead to approximate savings from avoided healthcare costs of $403 per individual per year. For the Landcare movement which exceeds 140,000 individuals, that number equates to $57 million nationally. 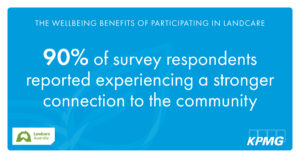 The report goes on to address additional savings to the Landcare volunteer community relating to productivity, and benefits owing to natural disaster resilience and recovery, with the combined value amounting to $191 million annually.

To get involved in your local Landcare group – click here

For any other questions related to our local landcare groups in the Mount Alexander region, contact Connecting Country’s Landcare Facilitator Hadley –  hadley@connectingcountry.org.au