Street Moss – a photography exhibition of our urban mosses

Street Moss is the subject of an exhibition of photos by Bronwyn Silver and Bernard Slattery that has just opened at Falkner Gallery, 35 Templeton Street, Castlemaine. The  show runs from 20 July to 3 September 2017 and the gallery is open each week between 11 am and 4 pm, Thursday to Sunday.

Bronwyn and Bernard are well placed to present a photography exhibition on moss, as both contributed to the very popular Guide to Mosses of Dry Forests in Eastern Australia which was published in 2014.  More recently, Bronwyn and Bernard, along with Ern Perkins, co-wrote Eucalypts of the Mount Alexander Region. These books are both fantastic achievements and contribute considerably to the understanding and appreciation of nature in our region.

The paved streets of our towns and cities are imperfect coverings of a nature always ready to stage a comeback. We’re all familiar with scenes of deserted settlements rapidly growing over with weeds, streets cracked by emerging shrubs and trees. But even bustling towns actively cleaned by teams of usually underpaid workers show signs that humanity is really just holding nature at bay.

The margins of manholes, the gaps between gutter paving stones, the shady neglected corners of industrial sites, all harbour active plant colonies ever ready to expand and undo the work of the bitumen and concrete industries.

The vanguards of these saboteurs of neatness and order are usually moss species. They can bide their time in the town’s narrowest cracks for implausibly long periods of dusty sterility, to flourish suddenly with the first shower of rain. Modest, apparently fragile, improbably beautiful: given time, they could bring down the cloud capped towers of the industrial world!

And they’re great to look at, too. 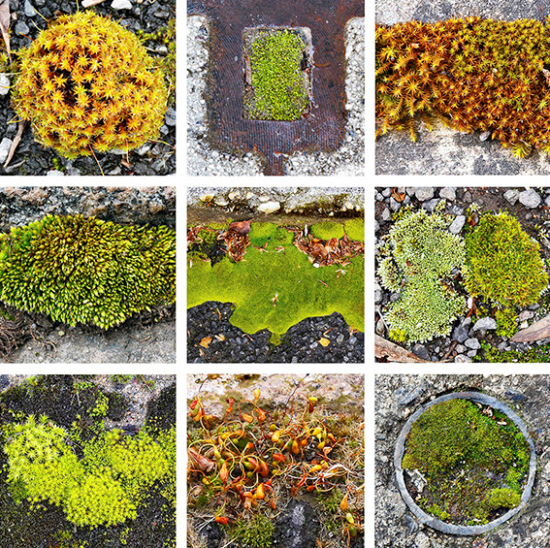 and another beautiful photo… 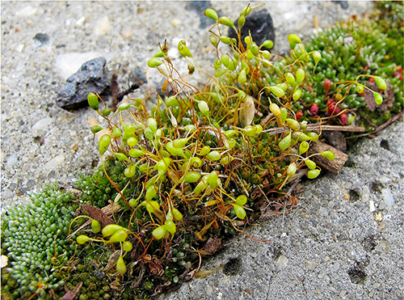