For this month’s Nature News, Tanya Loos from Connecting Country writes about the sociable skinks photographed by Nick Schulz on his property in Nuggetty.  This article was featured in the Midland Express on 5 December 2017.

Earlier this year, landholder Nick Schulz sent us a series of stunning photographs from a granite outcrop on his property in Nuggetty. The pictures show a large group of plump, spiny and spotted skinks seemingly enjoying each other’s company near the safety of deep rock crevices. They are Cunningham’s skinks and they turn the idea of reptiles being cold loners on its head! 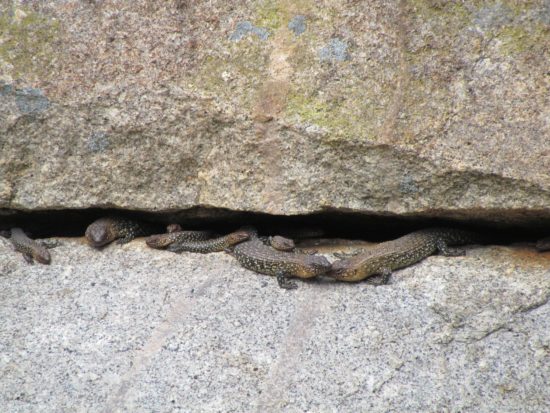 A family of skinks peers out from the safety of their rock crevice. Photo by Nick Schulz

The skinks live in long term family groupings, with a large breeding pair (around 25 cm long) and many immature siblings of various ages and sizes from previous years. This kind of social system is more commonly seen in birds and mammals. Researchers suggest that the family group represents safety in numbers, with more eyes to look out for predators such as birds of prey. Another advantage may be temperature-related, as the skinks huddle together to help keep warm during cold weather.

Cunningham’s skinks are only found around rocky outcrops. Each family group must have a rocky habitat with nice deep crevices to hide in.  If threatened by predators, the whole group scuttles into the cracks to hide. If the bird of prey or fox is persistent and tries to remove a skink from a crevice, they will inflate their bodies and make their spines stick out, becoming incredibly hard to dislodge from cracks. 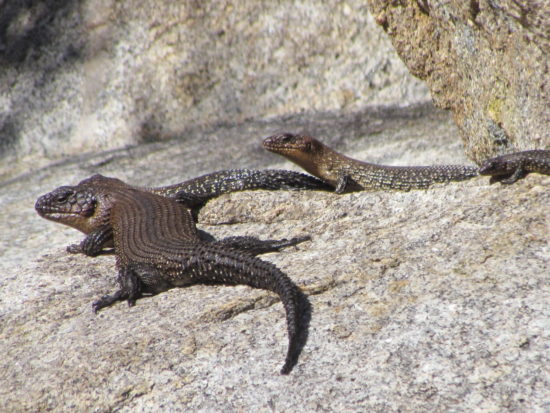 The very spiny tail is evident in this photo. Photo by Nick Schulz

Cunningham’s skinks are omnivorous, like other large skink species such as Stumpy-tails and Blue-tongue lizards. Most of their diet made up of plant matter such as flowers, fruits, soft leaves and shoots. They also eat insects, spiders and small lizards.

We have had reports of this species in Sutton Grange, Elphinstone and now Nuggetty. If you have granite outcrops on your property, you may be hosting a whole family!

Many thanks to Nick for sharing his wonderful photos with us. For more information or to report a Cunningham’s skink family, contact Tanya Loos at Connecting Country 5472 1594, or info@connectingcountry.org.au.