Posted on 7 December, 2016 by Connecting Country

For this month’s Nature News, found on page 38 in this week’s Midland Express (6th December 2016), Bronwyn Silver, nature photographer and co-author of Eucalyptus of the Mount Alexander Region, shares her interest in the natural beauty and wonder of our local lichens. 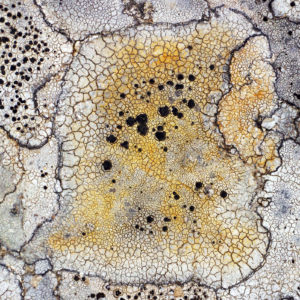 I was originally attracted to lichens, especially ‘map’ lichens, because they looked so unusual. Map lichens (Rhizcarpon geographicum) come in many colours and often have intricate arrangements due to each lichen being surrounded by a black border and adjacent to another. Many of the rock surfaces tightly encrusted with map lichen look like aerial maps or abstract art works.

Unless you are watching out for this lichen, these subtle and often small formations can easily be overlooked. But once I became aware of their wonderful abstract qualities and sought them out, I found them to be quite common in our bushlands.

Then, when I did more research, I began to find lichens even more fascinating. Although they are sometimes confused with moss, lichens are unrelated to moss or any other plant. In fact, lichen can be regarded as a community rather than a single organism because it always consists of at least one species of alga and one species of fungus that grow together in a mutually beneficial relationship. The fungus provides protection and absorption of minerals and gains nutrients from its photosynthesizing partner in return. 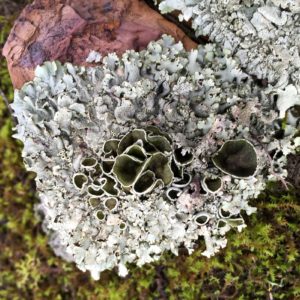 There are over 3000 known species of lichen in Australia; some are leafy, some are plant-like, and some are flat. Map lichen and other flat types are pretty much the same in all weather conditions. Other lichens are called ‘resurrection’ plants because they can switch off their metabolism and then fire up again when there is moisture.

The greatest threats to lichens are fire and pollution. However, the importance of conserving lichens is generally overlooked despite their many benefits for the environment. Like mosses, they can help with soil stabilization and the colonisation of barren environments.  Some animals eat them, insects shelter in them, and people have used them for food, perfume, medicine and dyes. For example, traditionally lichens were used to produce the colours of Harris Tweed.

And very importantly they can enhance our aesthetic appreciation of the bush with their varied colours, unusual shapes and wonderful patterns on the surfaces of rocks, trees, leaves and soil.

If you would like to find out more about lichens a good place to start is the three engaging interviews with Tasmanian lichenologist, Gintaras Kantvilas, available on the ABC Science Show – click here.

« Soils workshop with Katie, Hugh and NCCMA | The Mount Alexander Council Plan – have your say! »