Posted on 8 June, 2017 by Connecting Country

For this month’s Nature News (also on page 28 of this week’s Midland Express), local writer Dr. Lynne Kelly shares her love of spiders and knowledge of two local species of Orbweavers commonly found in the Castlemaine region. 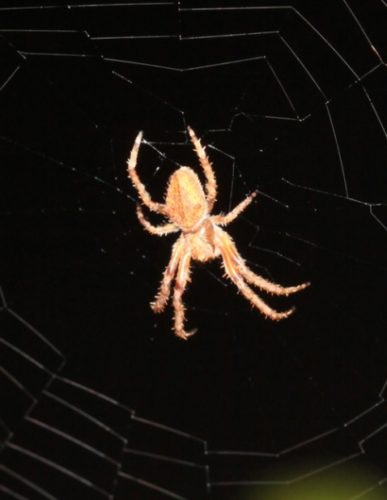 “I adore spiders. I used to be an arachnophobe but knowledge cures an irrational fear, slowly at first. Then one day I watched an orbweaver spin her web from start to finish. That was the day I became a spider-obsessive. In the Mount Alexander Shire two varieties of orbweavers dominate – the large golden orbweavers who stay on their webs all day and the slightly smaller garden orbweavers that spin in the evening and scamper to hide in the foliage at dawn.

We have a few species of garden orbweavers. They are all in the Eriophora genus, distinguished by two prominent projections near the front of the abdomen. Garden orbweavers usually remove most of their web before dawn, re-absorbing the protein in the silk to use again. A single reinforced strand is left across the gap between bushes or trees in the hope that it will still be there the following evening. If that strand is broken, the spider will point her abdomen skyward and release a fine filament of silk. In even the slightest breeze, this silk will catch on foliage and she will rush across, back and forward, to reinforce the mainstay of her web. She will then drop to the ground and attach an anchor. She’ll rush up again to spin the radials and a spiral outwards. From the edge of her nearly complete web, she will then circle back towards the centre laying down the sticky spiral. Having worked tirelessly for nearly an hour, she will rest, head down, waiting for her prey. 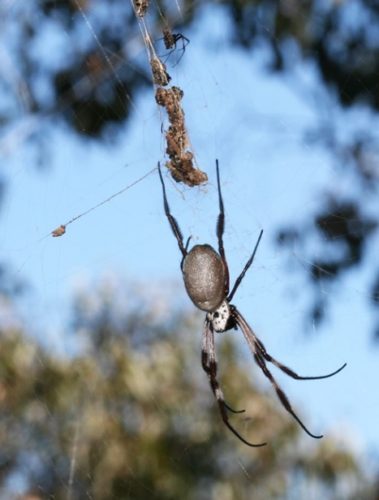 Right: Golden orbweaver in her web by day with a tiny male approaching from above. Photo taken by: Dr Lynne Kelly

Unlike the garden orbweavers, the huge golden orbweavers stay on the web all day, constantly repairing and reinforcing it. It is not the spider which is golden but the glow of the silk when it catches the sun. All the individuals I’ve seen locally are the Australian Golden Orbweaver (Nephila edulis). Discarded debris is left in the web above the spider to confuse the birds. Male garden orbweavers are only marginally smaller than their females but the males of the golden orbweavers are tiny by comparison [see above photo on right]. Although the males of most spider species will survive their sexual encounters, the Nephila males sacrifice themselves in their final act. Having produced a golden egg sac, the female will then die with the first frost.”

For further reading, Lynne’s book, “Spiders: learning to love them” (Allen & Unwin, 2009) is an excellent resource for those interested in finding out more about these amazing creatures.