Posted on 8 June, 2016 by Connecting Country

Last Wednesday (1 June 2016), Max Kay and myself (Saide Gray) from the Connecting Country Committee of Management were very fortunate to be able to attend the official launch of Long Swamp as a Trust for Nature covenanted wetland, now called the Murray Family Conservation Reserve: Long Swamp. After an initial gift of 40ha in 1992, the Trust for Nature, with support from the North Central Catchment Management Authority, donors and the community, recently purchased another 145ha of Long Swamp. Only one small site at the eastern end of the wetland remains in private hands. Long Swamp is a priority ecosystem as it supports an extensive area of cane-grass wetland vegetation, a restricted habitat essential for a range of rare and threatened species, such as the endangered Australasian Bittern, the vulnerable Australian Painted Snipe and the Growling Grass Frog. A small group of Brolgas was recorded as using the site prior to draining in 1965 and have been seen returning in more recent years.  The new addition also protects the ecological community fringing the Swamp, which is known as Grassy Eucalypt Woodland of the Victorian Volcanic Plain, nationally listed as critically endangered under the Australian Governments’ Environment Protection and Biodiversity Conservation Act.

Long Swamp is the only deep freshwater marsh in the approximately 50 diverse wetlands in the Moolort Plains, between Maryborough and Castlemaine on the north-eastern tip of the Victorian Volcanic Plain –  Victoria’s only national biodiversity hotspot.

As the wetland is surrounded by private land, this was a rare opportunity to briefly explore the site. The reserve was officially opened by Lily D’Ambrosio (Victorian Minister for Energy, Environment and Climate Change, and also Minister for Suburban Development), David Clark, (chair of the North Central Catchment Management Authority) and Max Ervin (Chair of Trust for Nature). We were guided on a walk through the swamp by local ecologist Damien Cook after a welcome to country by Graham Atkinson (chair of the Dja Dja Wurrung Aboriginal Clans Corporation).

Now the work of restoration begins. If you would like to know more about the Murray Family Conservation Reserve: Long Swamp, please contact Trust for Nature on 1800 99 99 33 or trustfornature@tfn.org.au.

The following photographs show some of the landscape and flora present at this new Wetland Conservation Reserve. 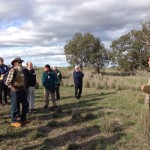 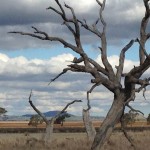 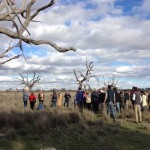 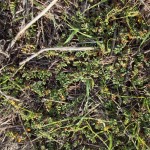 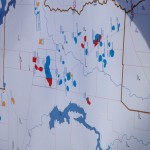 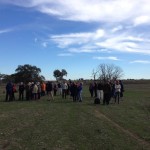