Listen up – is that an owl calling?

Autumn is a great time to be out listening for Powerful Owls at night. They call mainly at dusk and dawn during autumn and winter (April-July), early in their breeding season. During 2017-2019, Connecting Country volunteers were part of an exciting citizen science project to detect night birds, including the Powerful Owl, in the Mount Alexander region using bioacoustic monitoring. This formed part of the ‘Communities Listening for Nature’ projects run by the Victorian National Parks Association in partnership with Museums Victoria at multiple locations around Victoria. 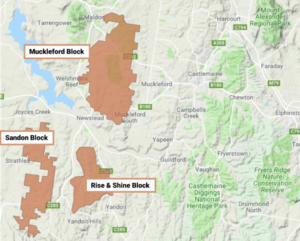 How to study night birds

Using song meters to record bird calls is a powerful way to collect data on bird distributions across large areas with minimal fieldwork. When Connecting Country volunteers had the opportunity to use song meters, they decided to focus on night birds to complement the existing knowledge from our daytime bird surveys.

The team selected 17 monitoring sites within three blocks of key bird habitat in the Mount Alexander region of central Victoria: Muckleford, Sandon and the Rise and Shine Reserve Bushland Reserve. 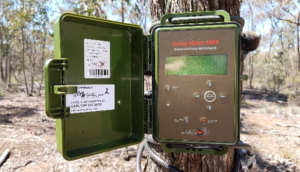 During 2018 the song meters recorded a whopping  5,005 hours (or 1.6 terabytes) of data. Calls were identified with a combination of listening by skilled volunteers and specialised computer software that interpreted sound frequencies as visual displays called spectrograms.

What did we learn about our night birds? 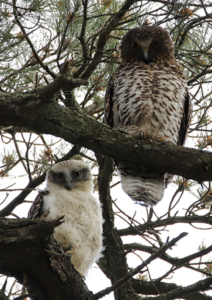 The team was very excited to find:

Results were compared with habitat data to provide valuable new information on habitat use for these species in the region that can guide future monitoring and habitat restoration efforts.

To hear the slow, far-carrying ‘whoo hoo’ of the Powerful Owl from Muckleford forest – click on the following recording

To hear the low, dog-like ‘woof woof’  of the Barking Owl from Rise and Shine Bushland Reserve – click on the following recording

Our local Listening for Nature study provided a large amount of acoustic data on night birds within our region and detected the presence of six of the target species. The project successfully brought together the local community with scientists and land managers to improve our collective understanding of species and ecosystems, and inform future management of our natural areas.

2 responses to “Listen up – is that an owl calling?”