Lions? We don’t have lions, but we do have Antlions!

Posted on 17 November, 2016 by Connecting Country 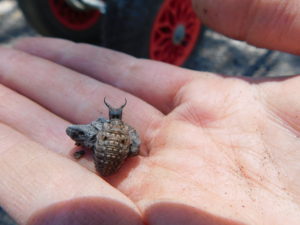 Connecting Country’s field botanist, Bonnie Humphreys, came across an interesting creature this week while out in the field conducting vegetation surveys and finding her way around her new camera. Upon return to the office, Bonnie did some hunting around to see what it was that she had captured with her camera. Turns out it is an antlion, but the species remains unknown. Perhaps one of our readers could help us identify it?

The antlions are a group of about 2,000 species of insect in the family Myrmeleontidae, known for the fiercely predatory habits of their larvae, which in many species dig pits to trap passing ants or other prey. 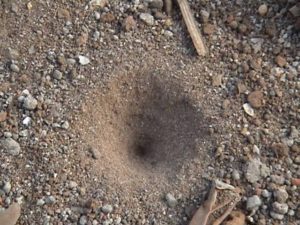 The sand traps are about 40mm diameter. The Antlion sit at the middle of the trap, covered by loose sands. When an ant or other small insects walks inside the trap, some sand falls into the centre to alert the Antlion. It flicks more sand to the ant and cause the ‘land sliding’. The ant then falls towards the centre and the Antlion attacks the ant by its long jaws.  Some other species larva burrow freely in sand or live on trees as predators. They pupate in soil with cocoon covered with sand. Eggs are laid singly and scattered in dry soil. You can watch another species of antlion in action here.

If you do recognise the species we’d love to hear from you, please leave a comment below.