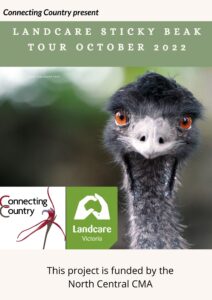 As part of the Landcare sticky beak tour during October 2022 we will be celebrating the work of Landcare and friends groups across the Mount Alexander / Leanganook region of central Victoria.

Today we will have a little sticky beak into the wonderful work of Maldon Urban Landcare Group (MULGA).

Maldon Urban Landcare Inc. (MULGA) started in 1992, and was the first urban Landcare group in Victoria.  MULGA has continued to be active over the years, predominantly doing weed control and revegetation work on parts of the Maldon Historic Reserve (managed by Parks Victoria), including the South German Mine area, Long Gully, and, in recent years, Anzac Hill. In the 1990s MULGA also established 11 fenced exclosures to protect indigenous vegetation across the Maldon Historic Reserve.

From 2017, MULGA has pursued a major project surveying indigenous eucalypts that, due to their size, have likely been growing since before European settlement (1852). So far they have surveyed 314 old trees in and close to Maldon.

MULGA’s main activities involve a monthly working bee on the first Sunday morning of the month, where the group carry out weed control work and regular monitoring of areas where they have previously worked. 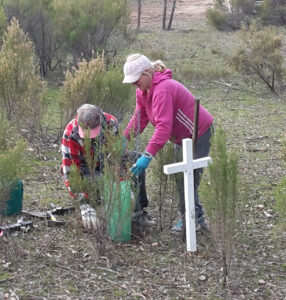 MULGA has worked to replace the trees at Anzac Circles on Anzac Hill, Maldon VIC. The Circles were originally planted with 64 Mahogany Gums in 1917, in memory of Maldon men who fought in World War I. There is only one original tree still alive. In 2017, the centenary of the planting, MULGA committed to spend its own funds to replant the Circles with native Yellow Gums (Eucalyptus leucoxylyn sub species pruinosa). The ground on Anzac Hill is really rocky and there is virtually no topsoil, so it’s amazing how well the plants are growing!  Near the carpark at the top of Anzac Hill, there is an information sign, with a QR code linking to the website of the Maldon Museum & Archives Association, where there is more information about the soldiers remembered.

Why not take a stroll up to Anzac Hill and check out the progress of MULGA’s plantings at the memorial site? To get there head up to Anzac Hill Road, Maldon VIC, as shown in the following map. 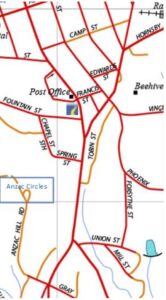 MULGA have also coordinated a ‘pre 1852 eucalypts in Maldon’ project with the objectives to obtain detailed records for eucalypts that were growing before 1852 (pre-European settlement) in Maldon, and to achieve long-term protection for these trees under the Mt. Alexander Shire Council Planning Scheme, or an appropriate alternative scheme.  The large, old indigenous eucalypt trees still surviving in the township of Maldon are of significant environmental and historical significance, and are rare examples of pre-European settlement vegetation in an urban setting. There is a brochure called ‘Living Treasures’, which provides a map and information about some of the trees and is available in the Maldon Visitor Information Centre (in the Shire Gardens on High St, Maldon VIC, open every day).

For more information on Maldon Urban Landcare Group (MULGA) and to become a member, please email them at maldonurbanlandcare@gmail.com

During October 2022, get out there and explore your local neighbourhood and see what plants and animals you can find in your local Landcare group’s sites! You never know what you might discover.

The Landcare sticky beak tour was made possible through a Victorian Landcare Grant with North Central Catchment Management Authority.