We are super lucky to have secured local Newstead resident and blog royalty, the wonderful Geoff Park, as a guest blog author this week, exploring the question of ‘Is landscape restoration working?’ This topic is close to our hearts, given Connecting Country’s decade of landscape restoration work and ecological monitoring. We are enlightened to read Geoff’s well thought out article exploring the questions, answers and unknowns. Please enjoy the following insights from Geoff Park and subscribe to his excellent Natural Newstead blog (https://geoffpark.wordpress.com/author/geoffpark/) if you don’t already!

Across Australia (and beyond) there are wonderful initiatives, many community led, to restore damaged landscapes. Here in Mount Alexander Shire the work of dedicated landholders and community groups such as Connecting Country is part of a continental effort of landscape restoration – at many different scales from patch to paddock to catchment. 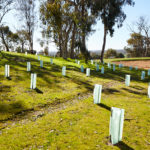 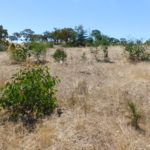 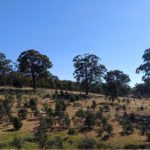 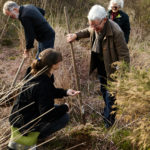 All up it represents a monumental expenditure of time, human resources and money – so how well is it working?

I’d like to tackle this question from three different perspectives.

Firstly, to what extent have we been able to repair the key ecological processes, such as absorbing and filtering water, enabling soil formation and promoting natural regeneration – fundamental things that healthy landscapes do well.

Our local landscapes have been ravaged, especially by mining which began in the 1850s and continued into the start of the 20th century at a significant scale, only to be followed by large-scale timber extraction during the world wars. At least five waves of vegetation clearance have occurred – each time the landscape has bounced back to some degree through natural regeneration, but it’s not the same and it’s certainly not as good. Much of the bush on public land in district is what I would term a thicket – regenerating eucalypts, often multi-stemmed and originating from an ancient lignotuber, at a density perhaps ten to a hundred times greater than the ‘original’ bush.

Repairing ecological processes is no easy task – with a metre of soil stripped from the land and new soil being formed at perhaps 10 mm in 100 years you can do the maths!

Secondly, how well are we succeeding in restoring the missing components?

Well what have we lost? A number of species of birds have become locally extinct – the Grey-crowned Babbler and Bush Stone-curlew have succumbed to loss of habitat and fox predation, while once common birds such as the Regent Honeyeater and Swift Parrot are on the brink. On the flora side of the equation we have retained most of the diversity of trees and larger shrubs (especially wattles), however smaller shrubs, understorey grasses, and forbs have been decimated. For example, Silver Banksia, was common locally until the advent of extensive grazing from the 1870s or thereabouts. It is now locally extinct around Newstead. It is encouraging to see landscape restoration becoming more sophisticated, moving from large scale establishment of eucalypts to more nuanced approaches such as targeted plantings of shrubs and grasses to an active exploration of how cultural burning techniques might restore something of the ‘original’ look and feel of the bush. Not only will this restore some of the missing parts of the puzzle it will also enable our landscapes to function more effectively.

And thirdly – what is happening to the structure, or put more simply … how does it look?

It’s ironic, but there are now more trees (in terms of stems/ha) in our landscape than there would have been 200 years ago, the thickening of eucalypts in response to repeated clearing has created a very different landscape. Where once there may have been 3 or 4 massive Grey Box per hectare on the low rises leading away from the Loddon River, there may now be upwards of a 1,000 stems per hectare. The open, ‘park like’ appearance that was often remarked on by landscape chroniclers, starting with Mitchell in 1836, was a scattering of large gums above wildflower filled native grassland – it was a mosaic with lots of open space. Sadly, there are few remaining examples – generally postage stamp remnants on private land.

This of course provokes the question, often hotly contested, of what should we be aiming for. One commonly used reference point is provided by what is known as the pre-1750 benchmark for ecosystems. Vegetation communities across Victoria have been described by botanists and ecologists in terms of what we think they might have looked like prior to European occupation, a descriptive reconstruction of the species composition and the abundance of some of the key species in each community, for example the density of characteristic eucalypts. While this can be a useful starting point and a guide, the onset of rapidly unfolding climate change has led to active questioning of this approach. In my home garden, some years back, I started planting beautiful, hardy Riverina wattles from 150 kilometres north – species such Eumong, Weeping Myall and Willow Wattle will I suspect become a feature of future local landscapes.

So … is landscape restoration working? It’s too early to say, however, there are some positive signs.

It’s instructive to look at time series aerial photography and in more modern times, satellite imagery Close to home, at Newstead, the change along the Loddon River between 1949, when the first aerial surveys were done, and 2002 – not long after Catchment Management Authorities were established to coordinate what is proving to be very successful large-scale river restoration, shows a remarkable and positive transformation. Click here for the details. The simple act of removing grazing along the riparian zone has led to extensive and sustained natural regeneration, augmented in recent times by strategic Landcare plantings.

Natural regeneration is happening on a significant scale across box-ironbark ecosystems in Victoria, but it is concentrated on the more marginal agricultural lands, the stony ridges and eroded hillslopes where topsoil is scant and fertility is low. Increasingly, however, a decline in some agricultural commodity markets and our proximity to large urban centres has driven a shift in land use across much of central Victoria, from a largely farming landscape until the 1980s to one where nature conservation is now a serious, widespread and legitimate land use – increasingly this is seeing once heavily cleared alluvial areas, not just the ‘lizard country’, being actively managed for biodiversity.

In my small patch around Newstead I’ve been tracking the disappearance and return of iconic woodland birds, like the Hooded Robin, Crested Bellbird and Chestnut-rumped Heathwren. My observations are anecdotal and are by no means systematic, but I am seeing some positive signs. The majority of species are doing okay, and while numbers move up and down with the seasons – there was a significant rebound after the Millenium drought broke in 2010-11 – my sense is that the trend is neither decline or resurgence but a fragile stability. How climate change plays out over the coming decade will be critical.

A core feature of Connecting Country’s work when it started over a decade ago was the establishment of a long-term monitoring program. This program, focusing on woodland birds, nest boxes and habitat assessment is a great example of tackling the question … is landscape restoration working? With monitoring results across reference and restoration site in a variety of ecosystems some patterns are starting to emerge to shed light on the question.

I’ll be interested to see what is emerging from a preliminary analysis of this data and while it won’t definitively answer the question … is landscape restoration working? … it will be a very useful start.

2 responses to “Is landscape restoration working?”