Bird of the month: Tawny Frogmouth

Welcome to Bird of the month, a partnership between Connecting Country and BirdLife Castlemaine District. Each month we’re taking a close look at one special local bird species. We’re excited to join forces to deliver you a different bird each month, seasonally adjusted, and welcome suggestions from the community. We are blessed to have the brilliant Jane Rusden and Damian Kelly  from BirdLife Castlemaine District writing about our next bird of the month, accompanied by their stunning photos.

For BirdLife Castlemaine District’s November 2022 bird walk, bird of the day was a Tawny Frogmouth, who patiently let 30-odd birdwatchers have a good look at it. The bird was found by our local young gun of a birder, the extremely sharp-eyed Tavish. I gather Tavish spotted a tree that didn’t quite look right, and it turned out that that odd-looking branch was a Tawny Frogmouth. 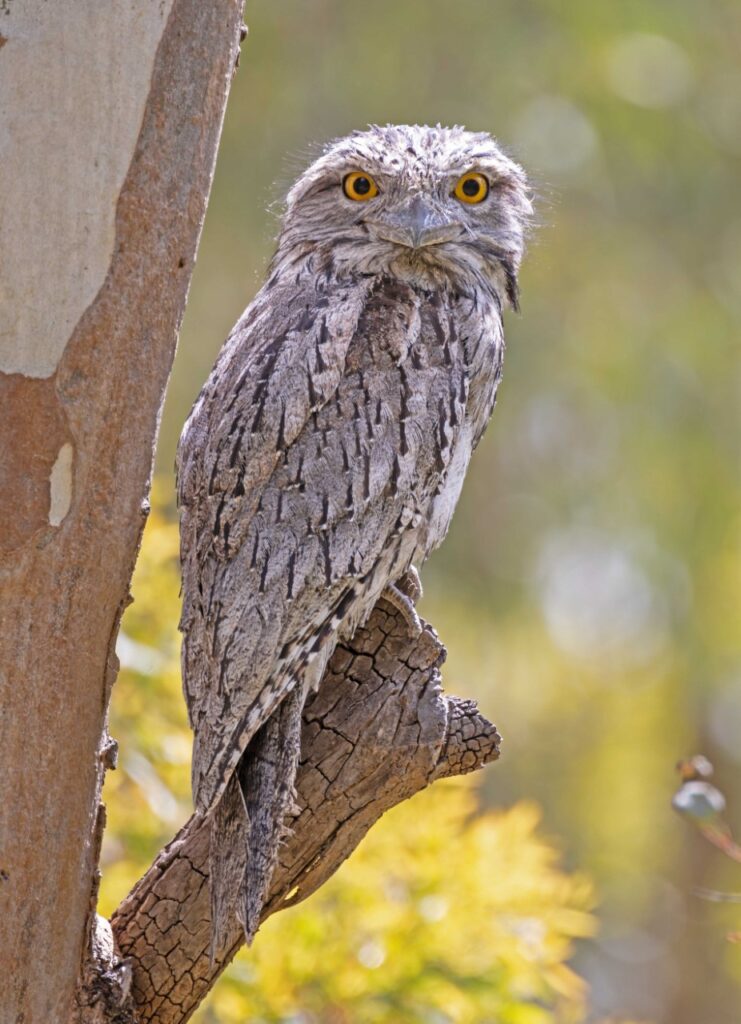 Personally I’ve spent hours and hours wandering through bush looking for them, but they are so brilliant at hiding in plain sight, I rarely see them. Not only are their feathers like tatty tree bark, but they strike a pose that makes them look like a dead branch that is not worth noticing. Their huge yellow eyes close to cryptic slits, as they watch potential threats and curious bird watchers wander by in oblivion. 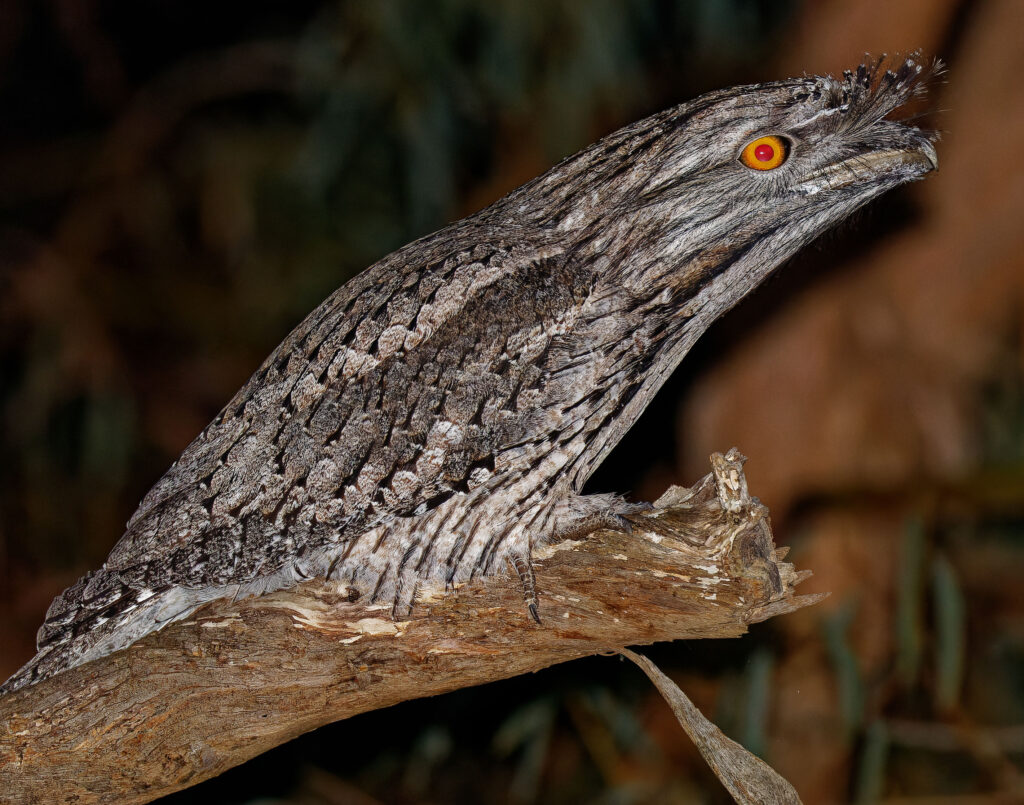 Tawny Frogmouth at night, pretending to be a dead branch (Photo by Damian Kelly)

Bright lights attract insects and towns attract mice, which in turn can lure nocturnal Tawny Frogmouths into urban environments, and sometime unfortunately and fatally in front of moving cars. I have witnessed one doing their classic hunting behaviour of perching on a low support, in this case a star picket, and pouncing on moths that were drawn to the light spilling from a window. Their diet consists of insects and mice, and also spiders, frogs and even small rats. Such incredibly cryptic feathers help the stealthy wait for unsuspecting prey to wander within striking distance, either on the ground or in the air.

Despite being nocturnal and hunting by stealth on silent wings, they are not an owl. Tawny Frogmouths belong to the frogmouth family, which include a few other species close by in Papua New Guinea. David Fleay (a pioneering Australian scientist and conservationist) described Frogmouth nests as a crude and crazy fabrication of sticks – often across the fork of a horizontal bough. Both female and male birds will sit on the eggs and feed the chicks – usually two chicks, but sometimes three or four. It’s currently the middle of their breeding season, which is usually August to December.

Tavish, I haven’t forgotten I owe you and your friend a chocolate frog for spotting the bird of the day. 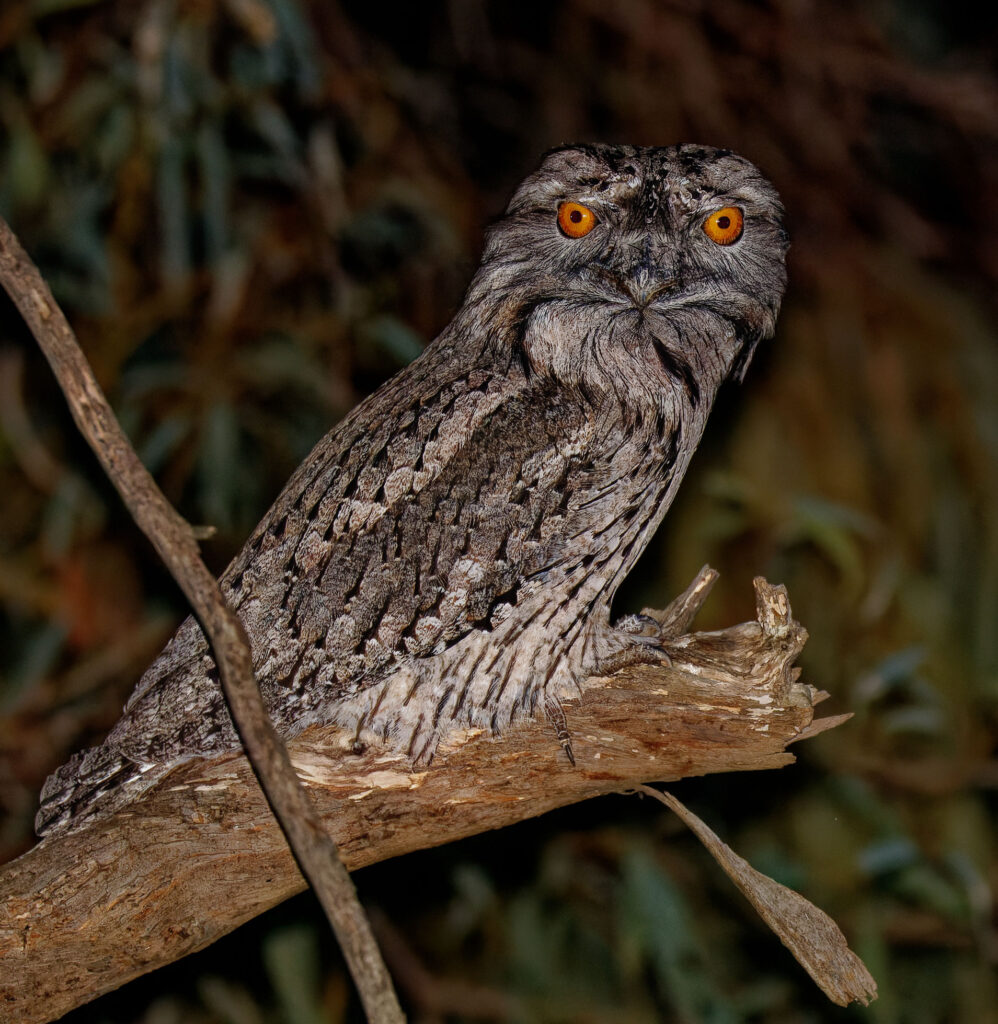 To listen to the call of the Tawny Frogmouth – click here