Bird of the month: Swift Parrot

Welcome to our fourth Bird of the month, a partnership between Connecting Country and BirdLife Castlemaine District. Each month we’re taking a close look at one special local bird species. We’re excited to join forces to deliver you a different bird each month, seasonally adjusted, and welcome suggestions from the community. We are lucky to have the talented and charismatic Jane Rusden from BirdLife Castlemaine District writing about our next bird of the month, with assistance from the brilliant Damian Kelly. You may be familiar with the fourth bird off the ranks.

It is the season to be looking out for and recording sightings of the critically endangered Swift Parrot, or Swifties as they are affectionately known. Having summered and hopefully bred in Tasmania, they migrate to South Eastern Australian mainland in mid autumn, for the winter months. As their name suggests, they are SWIFT. They fly fast, they eat fast and they call kind of fast. Beth Mellick at the Wettenhall Environment Trust in Castlemaine coordinates records of  sightings in Mount Alexander Shire, so let her know if you see Swift Parrots (including when, where and how many). 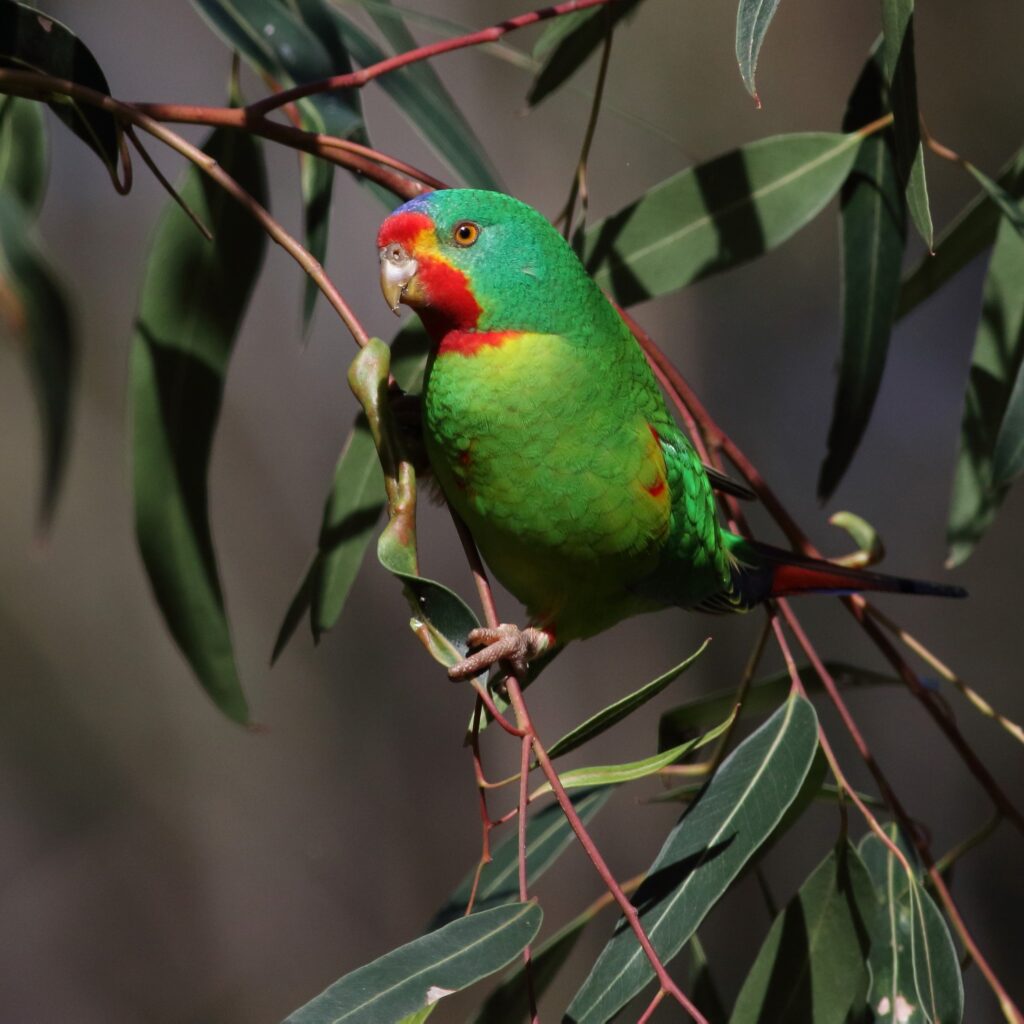 Stunning photo of a Swift Parrot by Leigh Pieterse. Swifties are VERY difficult to photograph at all, let alone this beautifully. We are very grateful to Leigh for giving us permission to use his photo.

Tasmania is the breeding ground for Swift Parrots, in the central north and along the eastern coasts. In autumn they migrate and scatter throughout the Great Dividing Range through Victoria, New South Wales and even southern Queensland. Given there are only about 2,000 individuals remaining, they can be very hard to find. However, they can also be heard and seen in flowering eucalypts in parks and gardens.

Swift Parrots are rare due to disruption to their breeding on two fronts. Logging of old-growth forest has reduced their habitat to dangerously low levels and reduced suitable nesting hollows. Additionally Sugar Gliders, which are introduced to Tasmania, can aggressively out-compete them and prey on eggs, chicks and adult birds. Swift Parrots face an up hill battle for survival, and a lot of effort goes into monitoring them. Given every sighting provides valuable data, I thought we’d look at Swifties, what to look for and how to identify them.

Swift Parrots are not easy to identify. Did I mention they are Swift! Also they like to hang out in mixed flocks with other lorikeets, and they are very hard to tell apart when in flight and feeding in the tree tops, as they all look brilliant green with red faces. In Central Victoria, the main species to confuse with Swift Parrots are the Musk Lorikeet and perhaps the immature Crimson Rosella. In the stunning photo above by Leigh Pieterse, you can clearly see the red face, including under the chin, bordered by a thin strip of yellow and the small patch of blue on the forehead. Musk Lorikeets don’t have red under the chin – they look like they are wearing a red mask across their eyes, whereas the Swift Parrot has just dipped their face in red. 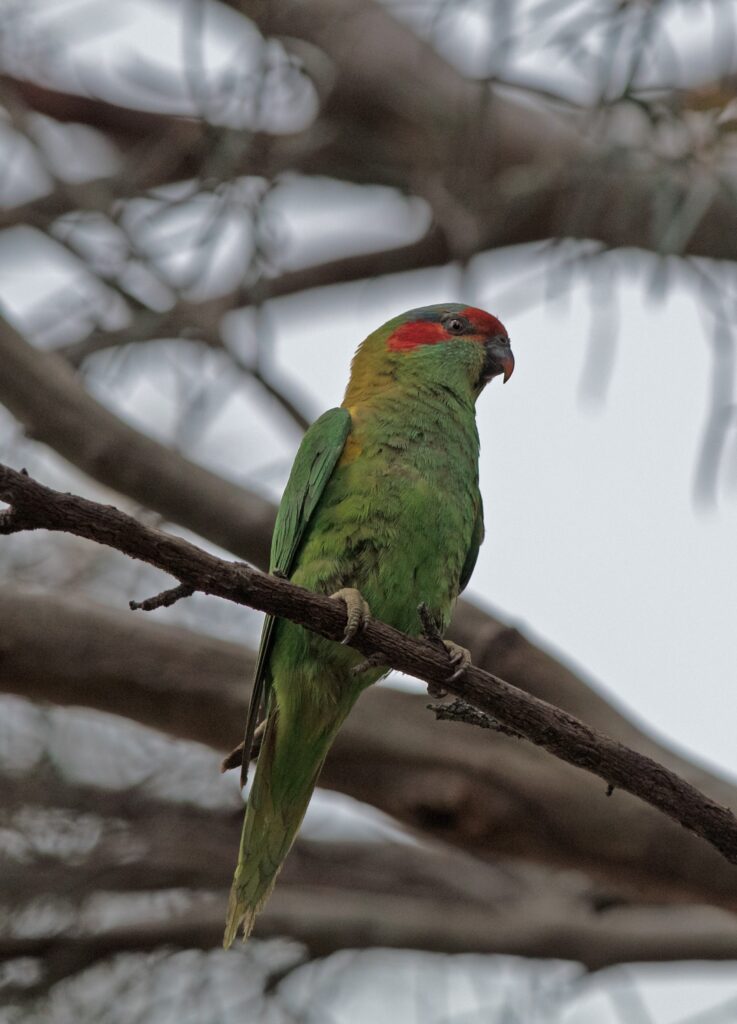 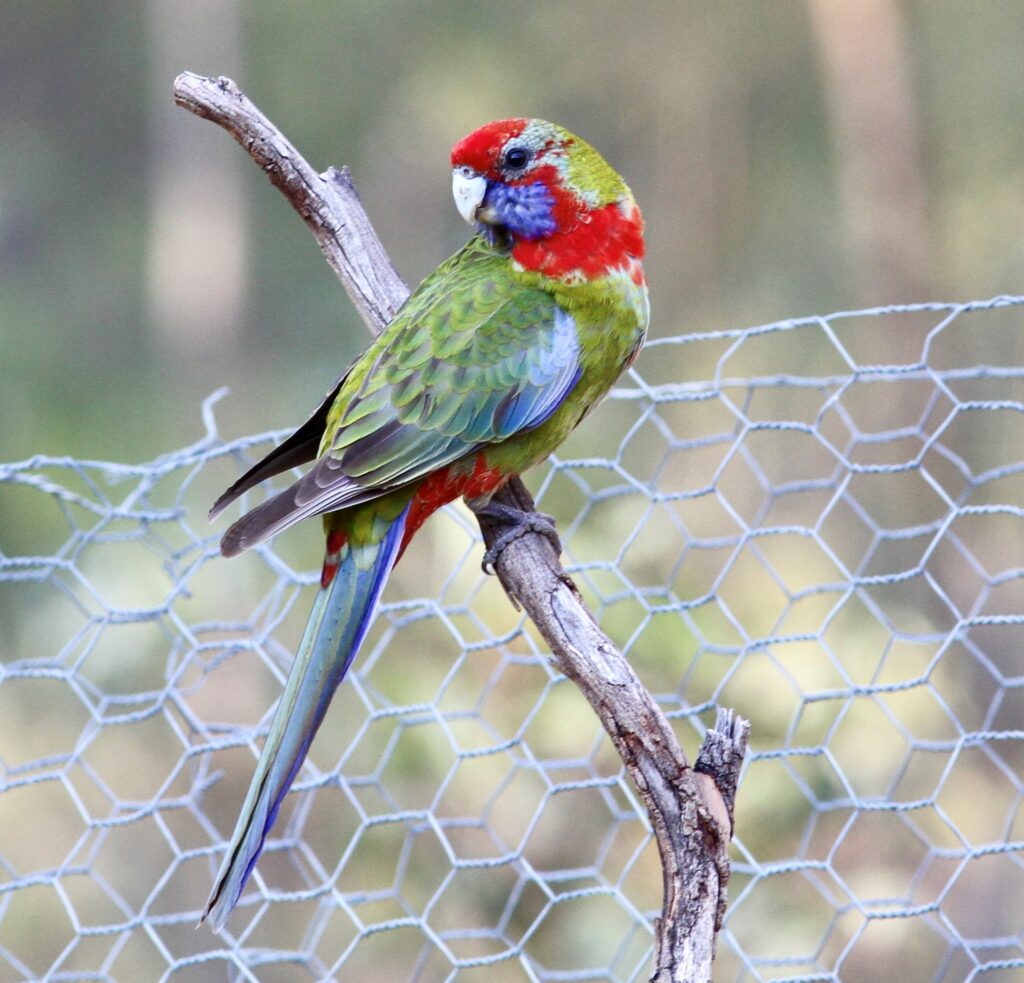 Crimson Rosellas have a blue cheek running across the face from the bill (see our very first bird of the month – click here ). That’s all very well if you can see their faces – not easy as they like to feed in the tree tops of flowering gums and acacias. If lucky enough to see one, it’s often in flight – a flock speeding across the sky and they are gone. A feature to look for is the long tail (you probably won’t see that it is crimson). In contrast, Musk Lorikeets are stubby in the tail department. Muskies are flying barrels compared to elegant long-tailed Swifties. Immature Crimson Rosellas are motley green in the body, with a tail that’s green but could be turning into the adult blue, and are unlikely to be in a mixed flock with Musk lorikeets or Swift Parrots.

Written by Jane Rusden with research assistance by Damian Kelly

3 responses to “Bird of the month: Swift Parrot”