Bird of the month: Spotted and Striated Pardalotes

Welcome to our seventh Bird of the month, a partnership between Connecting Country and BirdLife Castlemaine District. Each month we’re taking a close look at one special local bird species. We’re excited to join forces to deliver you a different bird each month, seasonally adjusted, and welcome suggestions from the community. We are lucky to have the talented and charismatic Jane Rusden from BirdLife Castlemaine District writing about our next bird of the month, with assistance from the brilliant Damian Kelly .

Personally, I find Pardalotes one of our most endearing birds, and at times quite curious little characters. I remember my first sighting of a Spotted Pardalote well: a flurry of stunning white spots on black as the tiny bird burst from it’s nesting hollow in an embankment, and flew off in front of me. Other times, while sitting quietly in the bush, I have seen them at very close quarters.

On one occasion a Striated Pardalote sat on a branch close to my head, whilst inspecting me and the drawing I was working on. I hope it approved of my efforts, as it took it time appraising the situation from a couple of angles.

Damian Kelly found some interesting facts in his literature search on Pardalotes.

Among some of Australia’s smallest birds, Pardalotes are widespread from northern Queensland all the way to Western Australia, but avoid the very dry inland and very hot tropics. Although there are four species in Australia, around Castlemaine (Central Victoria) you will only see Spotted and Striated Pardalotes.

Best described as a common species, you will often hear them, but sometimes it is hard to see them as they favour foliage high in the tree canopy. Big flocks can occur at times and it is not uncommon to see mixed feeding flocks with Spotted and Striated Pardalotes, Silver Eyes, and on occasion, Thornbill species. Food includes arthropods, larvae, lerp, spiders and manna from gums. Perhaps one of the easiest times to observe Spotted and Striated Pardalotes is when they are feeding on the lerps and their sugary secretions, on lower hanging leaves. 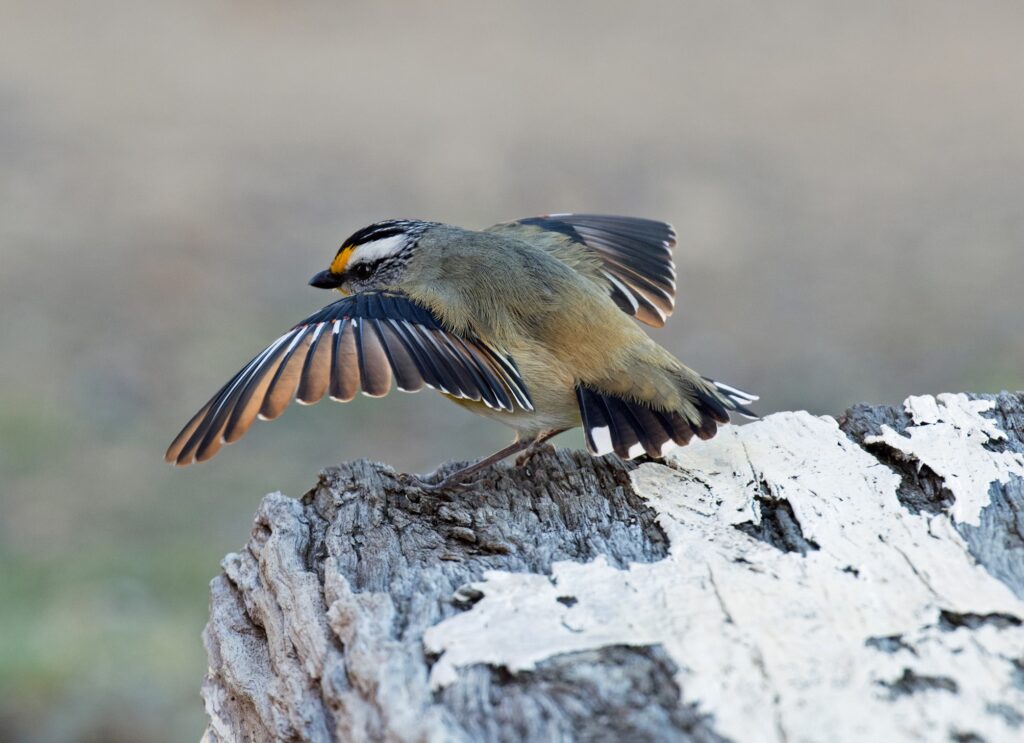 Striated Pardalote – note the bit of yellow and a white stripe above the eye, but there are no spots on the back or wings and the rump isn’t red like the Spotted Pardalote (photo by Damian Kelly)

They are generally considered as mostly sedentary, but they do disperse after breeding and move down altitude to lower regions in cooler seasons. Banding studies show that more than 90% of bird recoveries are less than 10 km form the original banding site, suggesting they don’t move far. However, some outliers have shown movements of 200 km or more at times.

Nests are generally lower down and in a tunnel. It is not uncommon to see them popping out of their nests right at ground level, as I did the first time I saw a Spotted Pardalote. Suitable sites can include eroded river banks, mounds of earth, tree hollows and even beneath railway platforms, as well as in holes and crevices in buildings. Breeding effort is split between both birds in a pair. The female will lay up to four eggs in a nest built and lined with bark by both the male and female. Both parents incubate and feed the young. 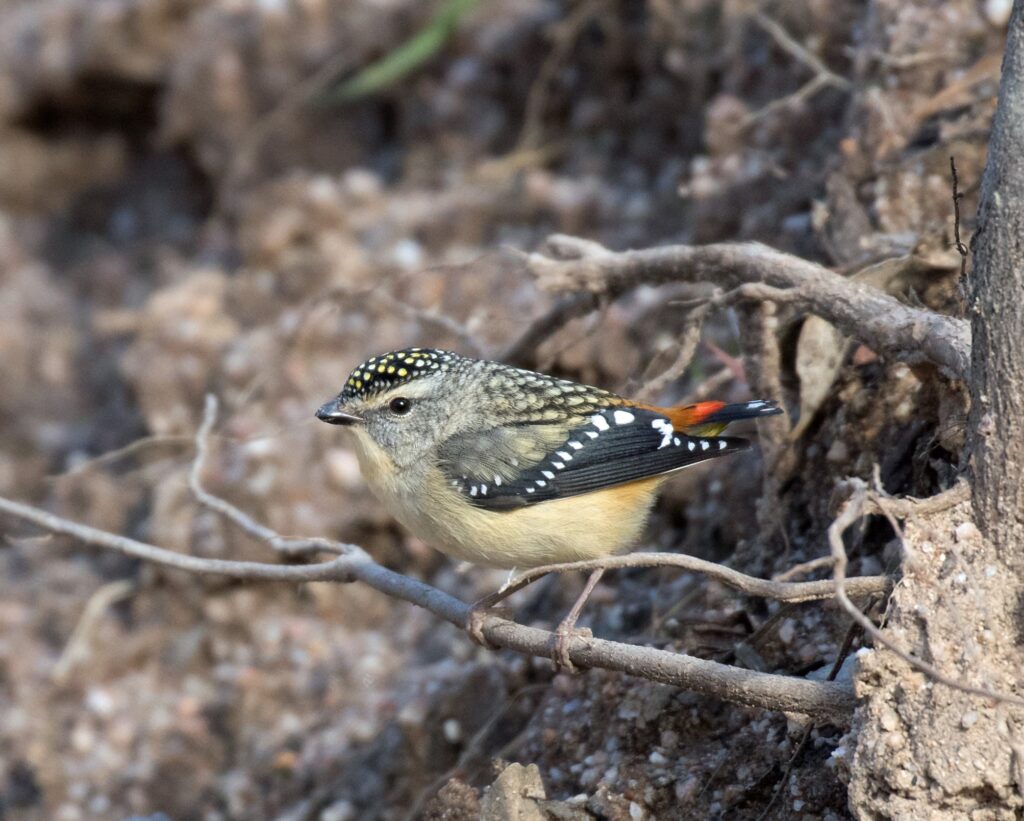 To listen to the Striated Pardalotes call – click here

To listen to the Spotted Pardalotes call – click here

By Jane Rusden with assistance from Damian Kelly

A big thank you to contributors to this edition of Bird of the Month – Jane Rusden and Damian Kelly – for their amazing knowledge.

6 responses to “Bird of the month: Spotted and Striated Pardalotes”