Bird of the month: Southern whiteface

Welcome to our eighth Bird of the month, a partnership between Connecting Country and BirdLife Castlemaine District. Each month we’re taking a close look at one special local bird species. We’re excited to join forces to deliver you a different bird each month, seasonally adjusted, and welcome suggestions from the community. We are lucky to have the talented and charismatic Jane Rusden from BirdLife Castlemaine District writing about our next bird of the month, with assistance from the brilliant Damian Kelly .

I could gush on and on about Southern Whiteface. In my opinion they are one of the cutest tiny balls of fluff birds around. A tiny bird with its distinctive white face, which gives it the most loveable expression, I get very excited when I’m lucky enough to find them. Actually it was Damian Kelly who found them at Muckleford Station recently, and his totally gorgeous photos became the impetus this month’s focus bird. OK that’s enough carry on, let’s look at who they really are.

I couldn’t say they are uncommon, but they are not common in Central Victoria either. I’ve found Southern Whiteface in paddocks with bush nearby, providing them with plenty of foraging opportunities, turning over leaf litter looking for insects and the occasional seed. You may also see them in low shrubs, as was the case when Damian took these gorgeous photos, and on fence posts. They move around in parties of up to about eight birds, sometimes in a mixed flock with other insectivores.

As is often the case with birds, not a lot is known about their breeding, movements or general behaviour. However, they are most likely resident in Central Victoria as they can be found all year round. We are on the southern end of their range, which is generally drier areas of Victoria, NSW, and parts of SA and WA.

Quite an adaptable bird, they will utilise manmade structures such as the verandah of an old house, and renovate Zebra Finch and Welcome Swallow nests, as well as Kingfisher tunnels. Nests come in various shapes and sizes, usually domed with a side entrance, and bulky with twigs, grasses, wool and even bits of tufty rubbish. 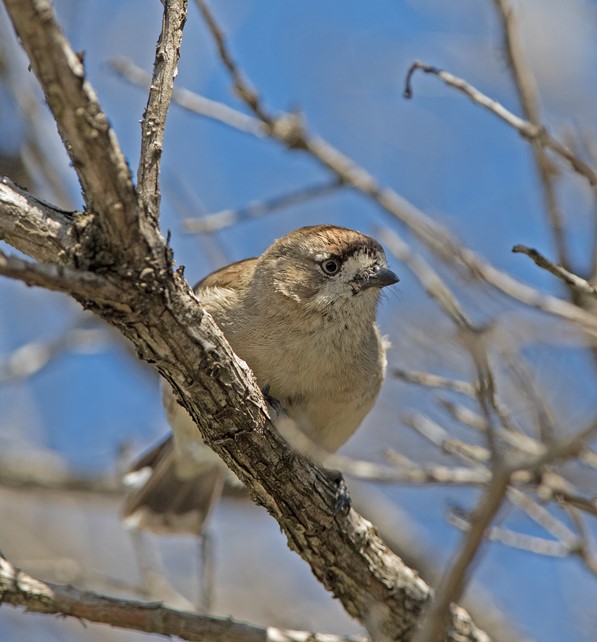 Endemic to Australia, the Southern Whiteface is a small passerine found in arid regions across the southern half of the Australian mainland (photo Damian Kelly)

Despite their diminutive size Southern Whitefaces are pretty easy to approach, but not always easy to see as their plumage is short on colour. Mostly you see their grey-brown back and dark tail, but with a closer look you’ll see their pale belly and pretty, almost heart-shaped, white face with a dark stubby bill and white eye ring. They can be mistaken for Thornbills and Weebills, because they are Similar in size and colour, though stouter. At only 12.5 grams, they are tiny.

They are also known as ‘squeakers’ – how crazy cute is that? If you listen to them calling, you’ll see why.

A big thank you to contributors to this edition of Bird of the Month – Jane Rusden and Damian Kelly – for their amazing knowledge and skills.

4 responses to “Bird of the month: Southern whiteface”