Bird of the month: Red-browed Finch

Welcome to our sixth Bird of the month, a partnership between Connecting Country and BirdLife Castlemaine District. Each month we’re taking a close look at one special local bird species. We’re excited to join forces to deliver you a different bird each month, seasonally adjusted, and welcome suggestions from the community. We are lucky to have the talented and charismatic Jane Rusden from BirdLife Castlemaine District writing about our next bird of the month, with assistance from the brilliant Damian Kelly and a splendid image from Martin Tatton.

The small but charismatic Red-browed Finch

A fairly common sight in Castlemaine gardens is the small and beautiful Red-browed Finch. At first glance they may appear as a flock of small brown birds, but as they fly away you’ll see a flash of their red rumps. On closer inspection their red bill, with that distinctive finch shape for foraging seeds, and the red stripe through the eye, become apparent. They can be quite bold, which is how Martin got some lovely photos on his phone, at a friend’s place in Castlemaine (pre-COVID-19). 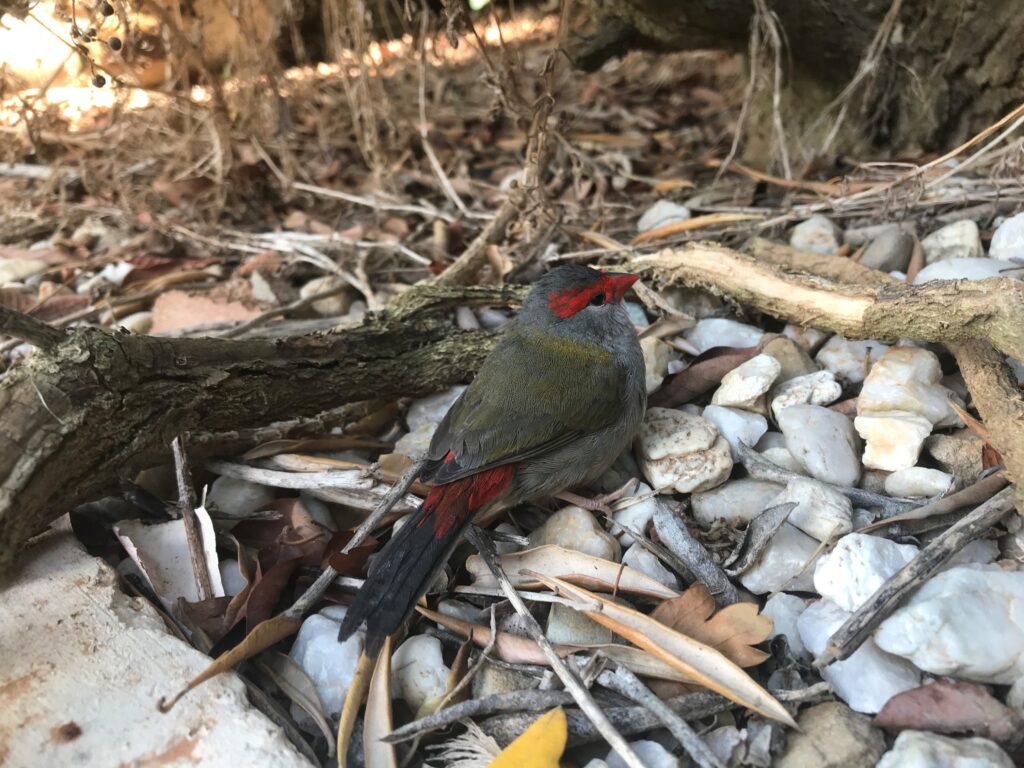 Martin’s photo of a Red-browed Finch, taken with his phone (photo by Martin Tatton)

Damian Kelly writes about this distinctive finch with its red flash of colour:

‘Chances are that any birds you see around your house are locals. They are largely a sedentary species with only local movements outside the main breeding season. In mountainous areas there is some evidence of altitudinal movement, with birds moving to lower elevations in winter. Several banding studies have shown 99.9% of birds are found less than 10 km from nesting sites. Some studies have shown that birds rarely move more than 400 m from their main territory, often near water. 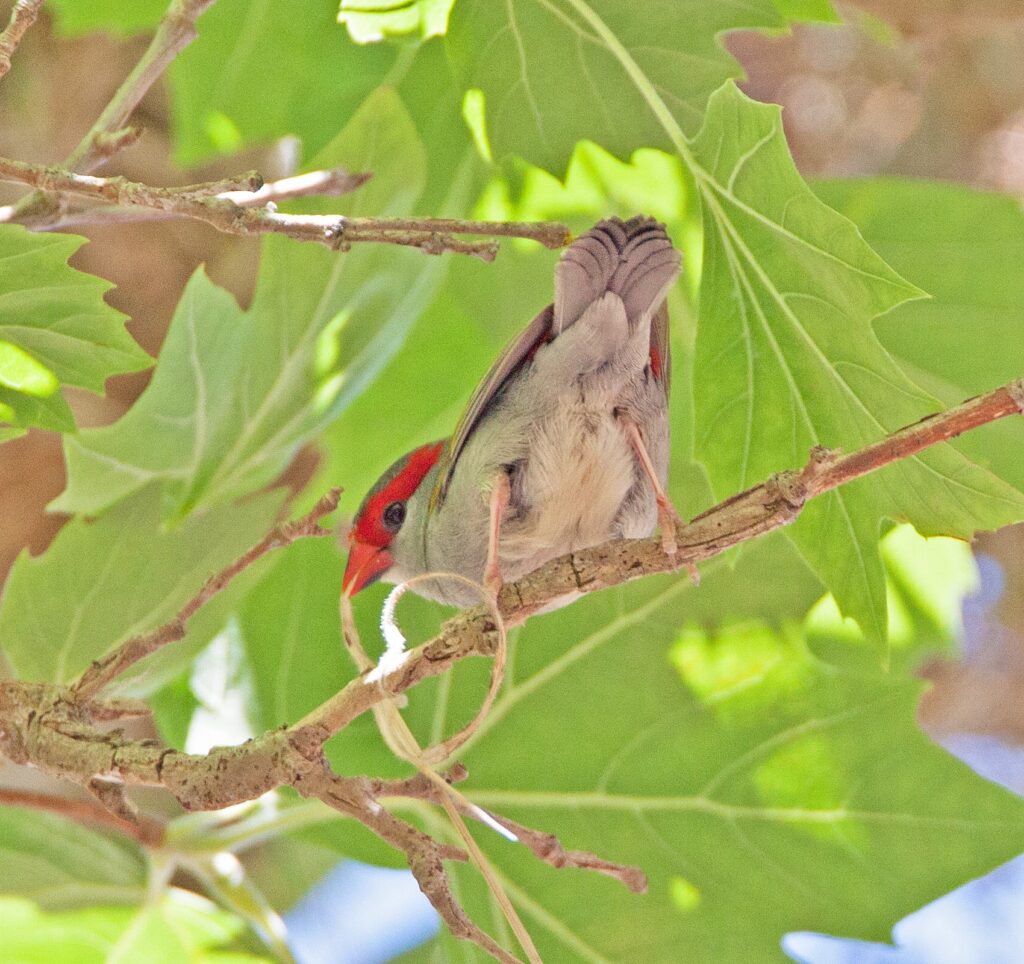 If you watch them feeding you will notice that they break up seeds to get the main contents and discard the husks. They normally do not eat seeds whole. Although mainly seed eaters, they will also take insects if available.

They are monogamous, and both birds incubate and feed the young. Pair bonding remains constant throughout the year, even when moving in flocks outside the breeding season. Sometimes groups nest communally with several nests in a tree. In Victoria, the breeding usually occurs from August to April and a single pair may have up to three clutches in a season. 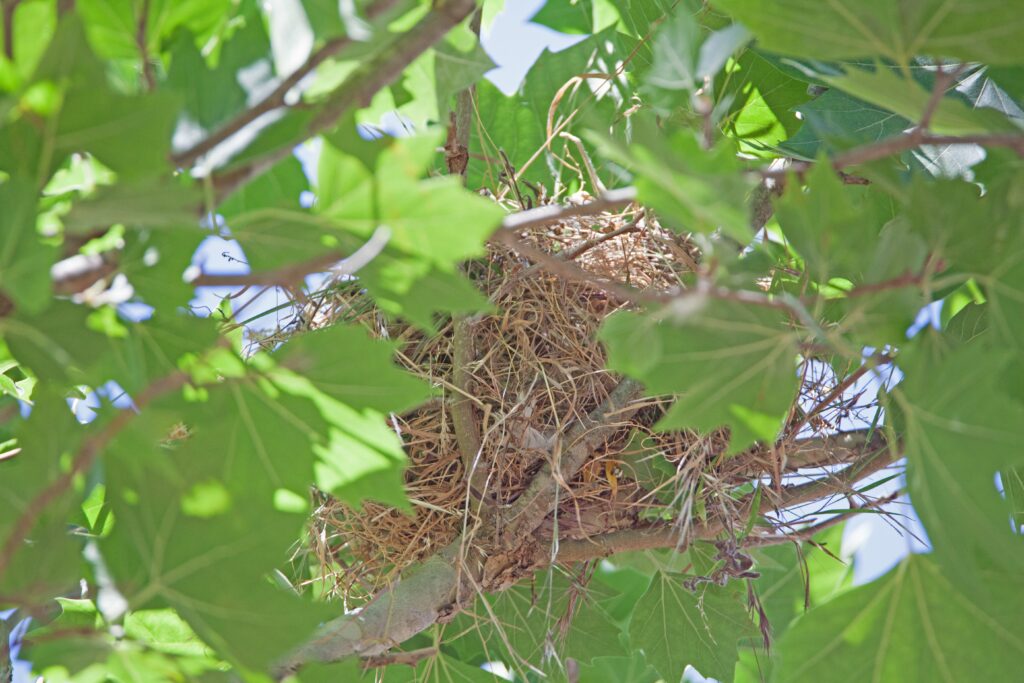 Nests are an untidy collection of grass, twigs, feathers, wool and bits of string, with a tunnel entrance. Parents and young continue to roost in the nest for several weeks after hatching. Outside breeding season they also utilise roosting nests that look like breeding nests but are unlined. Up to six birds have been recorded roosting in these nests.

Around Castlemaine they are common and widespread and can be found in gardens and along the creeks (including the Forest Creek Trail). They are adaptable and can be found nesting in non-native plants as well as natives.’

A big thank you to contributors to this edition of Bird of the Month – Jane Rusden and Damian Kelly – for their amazing knowledge, and to Martin Tatton for his photo.