Bird of the month: Peregrine Falcon

Welcome to Bird of the month, a partnership between Connecting Country and BirdLife Castlemaine District. Each month we’re taking a close look at one special local bird species. We’re excited to join forces to deliver you a different bird each month, seasonally adjusted, and welcome suggestions from the community. We are blessed to have the brilliant Damian Kelly from BirdLife Castlemaine District writing about our next bird of the month, accompanied by his stunning photos.

Peregrine Falcons can be found worldwide on every continent except Antarctica, with several subspecies identified. The species name peregrinus refers to its wandering habit in the northern hemisphere where it migrates to warmer climes in winter.

However, the Australian subspecies (Falco peregrinus macropus) does not migrate. The subspecies name macropus comes from macro = large, and pus = foot. It seems that the Australian birds have developed a large foot to facilitate the taking of Galahs, one of their preferred prey items. In addition, because they do not need to migrate, they have shorter wings and are heavier than most northern subspecies. Although this is less favourable for long flights, it aids in speed and manoeuvrability, which makes hunting medium to large parrots easier. In Australia, as in other parts of the world, Peregrines have adapted to humans and are now well-established nesting and living in large cities where they utilise tall buildings. 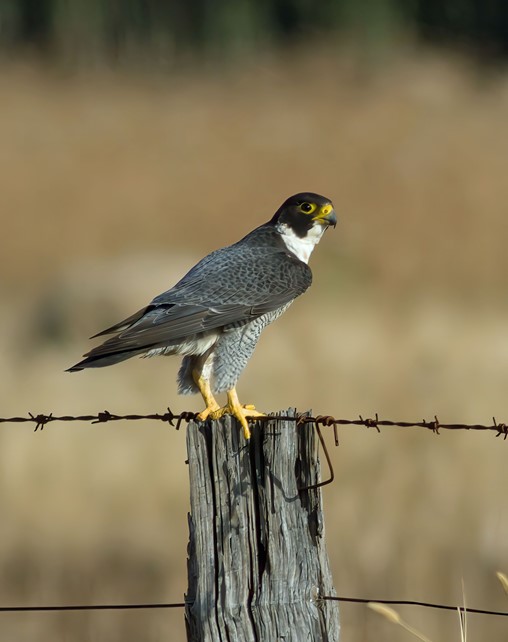 They have been used as trained hunters in the sport of falconry for at least 3,000 years. They are easily trained and adapt to humans, being easy to breed in captivity.

It is the fastest animal on earth, having been clocked at 112 km/hour in level flight and over 300 km/hour in a dive, recorded when a female Peregrine chased a skydiver. Prey consists largely of other birds, normally caught in flight, although sometimes knocked out of the sky during a fast dive. City falcons primarily take feral pigeons, along with other small birds such as honeyeaters and some water birds.

They also have a murderous reputation amongst their own kind, with female falcons killing other females to gain possession of a nest site. Occasionally a new male will drive away an existing male and take over a site with a sitting female. This is being played out with the Collins Street falcons at the moment in Melbourne. Females are larger than males.

Australian Peregrines tend to be sedentary, holding territories and nest sites throughout the year. They do not build their own nests, preferring ledges on cliffs as well as ledges on buildings in large cities, large hollows or sometimes taking over the existing nests of other species such as Whistling Kites. Research in Victoria has identified around 256 active nests – 60% on cliffs, 10% on buildings, 14% in stick nests of other species, and 16% in tree hollows. Both males and females incubate the eggs and feed the young. 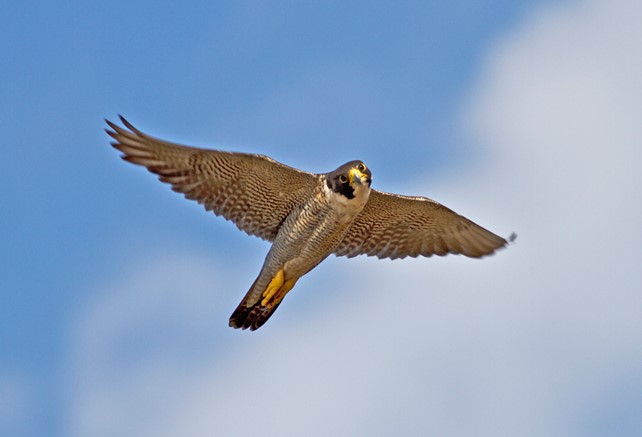 If you want to watch active nests in Australia, two have online webcam feeds with young that hatched around early October 2022.