Bird of the month: Fan-tailed Cuckoo

Welcome to our eighententh Bird of the month, a partnership between Connecting Country and BirdLife Castlemaine District. Each month we’re taking a close look at one special local bird species. We’re excited to join forces to deliver you a different bird each month, seasonally adjusted, and welcome suggestions from the community. We are lucky to have the talented and charismatic Jane Rusden from BirdLife Castlemaine District writing about our next bird of the month, with assistance from the brilliant Damian Kelly and photos by Ash Vigus

More questions than answers are thrown up by this often secretive species. However, occasionally the Fan-tailed Cuckoo will show itself in plain view, as I had the opportunity to witness recently whilst doing bird surveys in the Whipstick (north of Bendigo in Victoria). The bird was hanging around, low to the ground, in a patch of Cassinia, which is good habitat for small birds. I’m sure of no coincidence…

In short, the Fan-tailed Cuckoo inhabits open woodland with dense, tall understory, preferably in a gully. Locally that means Golden Wattle and Silver Wattle, and occasionally mallee shrubs. As partial migrants, in winter it appears birds generally move north and return in spring. However, some birds remain all year.

Apparently, some birds stay close to where they hatched, others migrate and return to near where they hatched, and others move on. In short, their complicated movements are not well understood. Recapture in banding studies is low and the studies few, leaving us scratching our heads to some extent. What is obvious is that calling is heard in spring and generally not in winter. Is this due to winter migration or are they just keeping quiet? 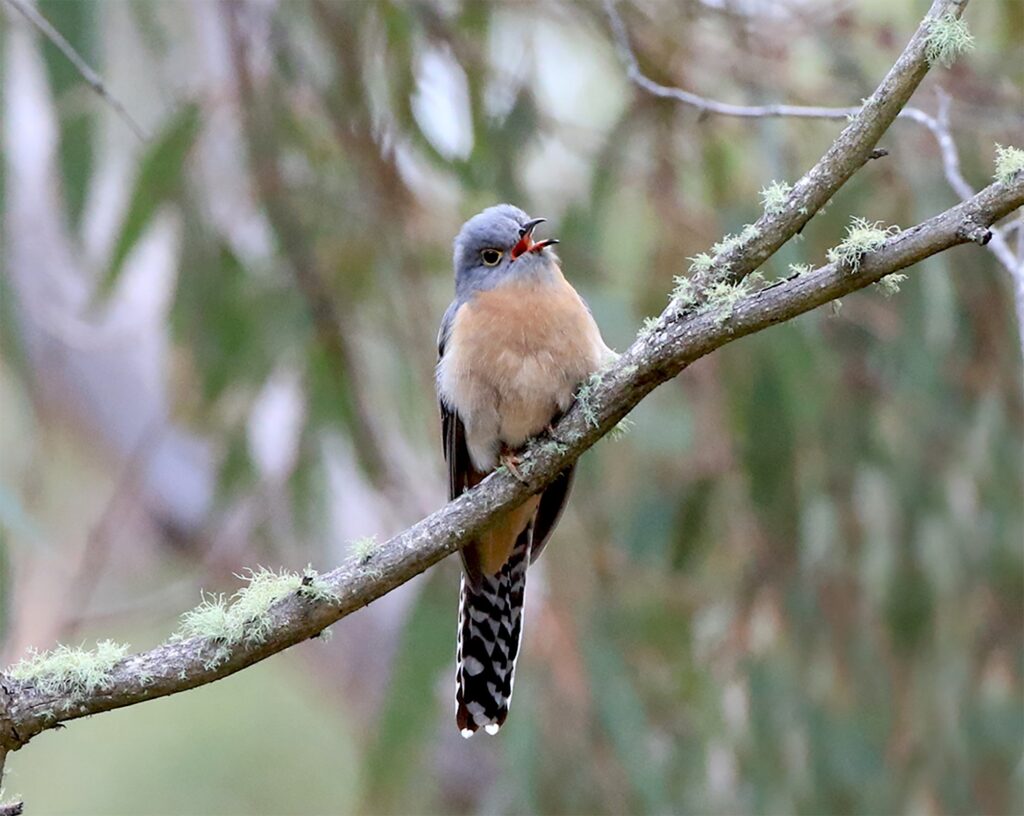 The Fan-tailed Cuckoo enjoys hairy caterpillars in its diet, but will also take a variety of other insects and their larvae (photo by Ash Vigus)

The diet of the Fan-tailed Cuckoo consists mostly of insects, including Lepidoptera larvae (caterpillars), often foraged close to or on the ground, or in sallying flights. Interestingly, Fan-tailed Cuckoos can be found in mixed foraging flocks of the exact insectivorous bird species whose nests they parasitise. Wow, another question … why would a small woodland bird tolerate the presence of a larger bird who kills their eggs?

Talking of killing eggs, the whole point of cuckoos is that they lay eggs in other birds’ nests, who then raise the cuckoo chick to fledging. Let’s start at the beginning. Some cuckoo eggs mimic those of the host species, but Fan-tailed Cuckoo eggs do not. Their host species are Speckled Warbler, Gerygone, White-browed Scrubwren, heathwrens, fairy-wrens and thornbills. However, studies show that Brown Thornbill and White-browed Scrubwren are the most common victims. One thing in common with these species is their nests are domed or enclosed and close to the ground. At times Fan-tailed Cuckoos will also lay in cup-shaped nests built by robins and occasionally honeyeaters. 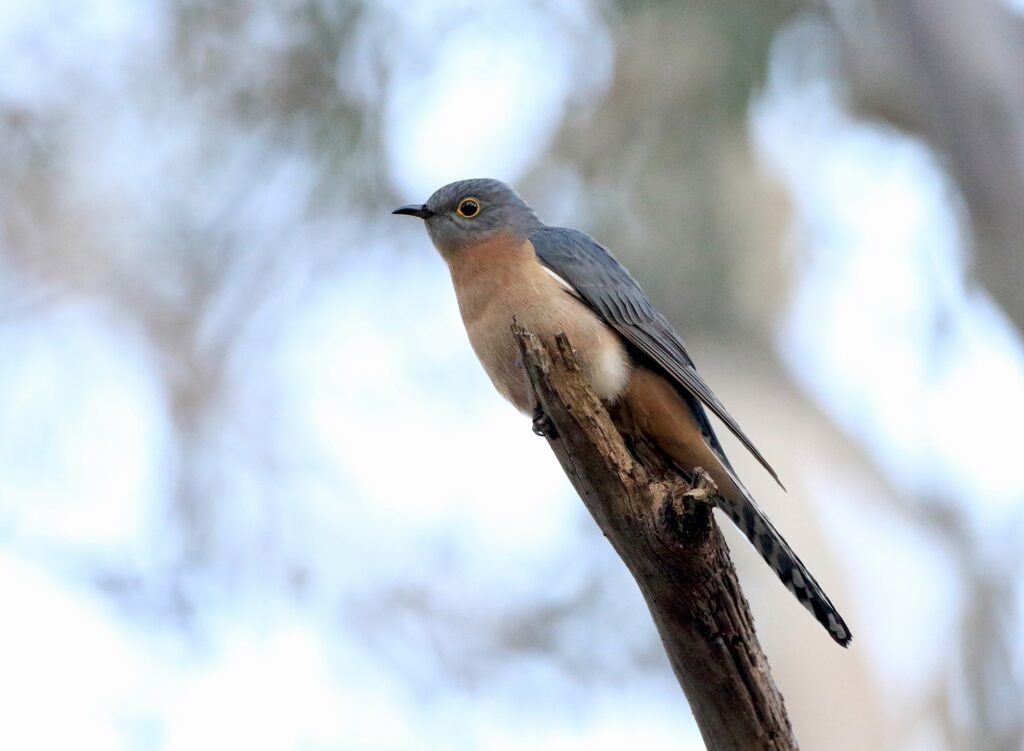 The Fan-tailed Cuckoo will lay one egg in a host’s nest. It has been suggested that the egg is placed via their bill or by holding in the foot, but there is little evidence of actual laying. How the host’s eggs are removed is unknown. There are records of Pallid Cuckoos removing a Fan-tailed Cuckoo egg, and visa versa, from the host’s nest. Now that’s a pickle! Generally, cuckoos leave the feeding and raising of their chicks to the poor overworked host parents. However, there are a few records of Cuckoo parents supplementing the feeding of their chicks, but not reducing the work for the host birds in any way. It just means a very well-fed Cuckoo chick.

Have you now got more questions about Fan-tailed Cuckoos, than answers? I know I do.