Bird of the month: Common Bronzewing

Welcome to our 23rd Bird of the month, a partnership between Connecting Country and BirdLife Castlemaine District. Each month we’re taking a close look at one special local bird species. We’re excited to join forces to deliver you a different bird each month, seasonally adjusted, and welcome suggestions from the community. We are lucky to have the talented and charismatic Jane Rusden from BirdLife Castlemaine District, and the brilliant Damian Kelly, sharing their writing and images about our next bird of the month.

This month we are looking at the Common Bronzewing, simply because they are resident at my place and are really quite odd! Regularly seen foraging and using the bird baths, for such a flighty shy bird, they have become quite used to us. It was a female having a prolonged bathe, for about 20 minutes, that drew my attention. She sat low in the water and rolled on her side, wing in the air (see photo), having a good soak, as if having a luxury spa. Pedicure next? I’ve seen Emus do similar, but they are enormous with such crazy long legs, so what else are they going to do? Common Bronzewings also clap, not so much in applause, but when flushed. They will usually fly from the ground up into a tree. As they take off, they clap their wings a few times, and once landed, will bob their heads as they look at you from a safe perch.

The Common Bronzewing is exactly as its name suggests, having bronze colours under the wing and being common throughout most of Australia from coasts to the Mallee. However, they were not always common as they were once illegally shot for food and sport. Thankfully, now they are easily found in Central Victoria, favouring wooded areas. They can also be found in suburban gardens, which is an indication of their adaptability. Their diet consists mainly of seeds, with occasional leaves and invertebrates. I see the resident ‘Bronzies’ foraging on the ground or in low bushes, singularly or in groups of two or three, mostly in the morning or at dusk. They visit my bird baths for a drink, most often at dawn or early morning and dusk. This is typical behaviour for the species.

Although not the only bird to compete in the scrappiest nest award, they are up there with the best. There’s a considerable pile of fine Casuarina twigs on the ground that I need to sweep up, which is the remains of a nest building attempt on top of the fire shutter housing above our windows. There’s far more twigs on the ground than ever makes it into their questionable nest building. In fact eggs roll out on a regular basis. I often carry on about how intelligent birds are, but I’m not so convinced when it comes to Bronzies. Don’t tell anyone I said that about a bird!

However, when the iridescent patch on their wings lights up, throwing flashes of golden yellow through teal green, magenta and purple colours, they are quite stunning and majestic. Their soft pinky brown chests, grey upper body and creamy white forehead on the males set off their bright pink feet beautifully. They can be easily confused with the darker and less iridescent Brush Bronzewing, which can be see along Forest Creek on occasion. Also confusing is their deep booming call, with repeated long notes that can easily be confused with the Painted Button-quail, who favours the same habitat. Damian and I have nearly confused them when heard in Kalimna Park, for example.

There’s a lot to say about this beautiful species. They fly quite fast, with speed measured from vehicles at 58-60 km/hour, and a maximum of 67 km/hour. Movement in response to food and water availability is a regular occurrence for at least part of the population, with distances up to 360 km being recorded.

Another fun fact about the Common Bronzewing is they can safely feed on Gastrolobium bilobum, commonly known as heart-leaved poison, which is a highly toxic plant common in western and northern Australia. This may explain why, in at least some areas, they are not particularly hunted by cats and dogs, who would normally find a largely ground dwelling bird easy prey.

Common Bronzewing on its scrappy nest, high up on a roller shutter housing (photo by Damian Kelly) 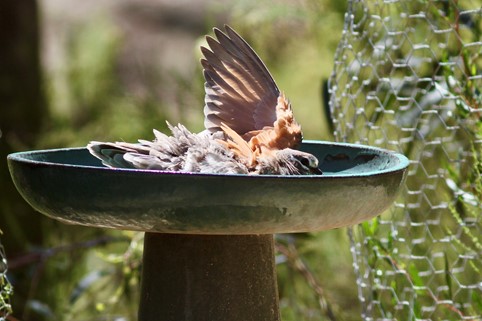 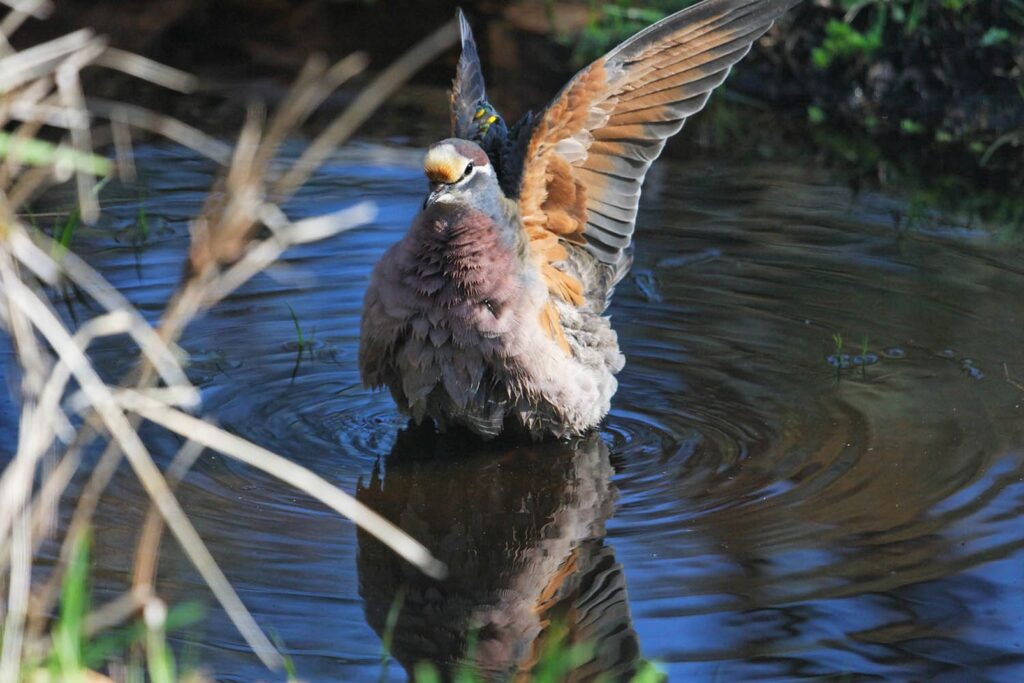