Bird of the month: Blue-billed Duck

Welcome to our 27th Bird of the month, a partnership between Connecting Country and BirdLife Castlemaine District. Each month we’re taking a close look at one special local bird species. We’re excited to join forces to deliver you a different bird each month, seasonally adjusted, and welcome suggestions from the community. We are blessed to have both the brilliant Damian Kelly and talented Jane Rusden from BirdLife Castlemaine District writing about our next bird of the month, accompanied by their stunning photos. 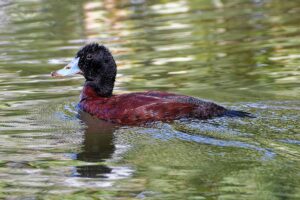 July 2022’s BirdLife Castlemaine District walk took us to Bendigo Water Reclamation Plant in Epsom VIC. We were treated to a wonderful tour of Lagoon No. 6, by passionate Coliban Water staff Leon and Rebecca, who were keen to share this wonderful birding hotspot. (Incidentally we saw 58 species and huge numbers of many species sighted.) Along with Musk Ducks, Blue-billed Ducks were among the species everyone got very excited about seeing.

The handsome male is distinctive and easy to identify with its blue bill, glossy jet black head and chestnut body. The female is overall grey with pale barring, a bit like a Freckled Duck or lighter coloured Musk Dusk, and harder to identify for this reason. Blue-billed Ducks are smaller than Musk Ducks, but the two species are closely related genetically.

Due to their shyer nature, these ducks are usually seen at a distance. In the water, Blue-billed and Musk Ducks can appear similar as both swim with a low posture, although the Blue-billed Duck sits slightly lower in the water. Like the Musk Duck, Blue-bills feed mostly by diving to the bottom of the water to collect a variety of vegetation as well as insects, larvae, molluscs and crustaceans. They have been observed diving to depths up to three metres and they can remain submerged for up to 30 seconds. They also swim alongside banks where plants overhang, stripping seeds and other parts.

As they are specialised diving birds, they cannot walk very well on land, with legs set back on the body. They are rarely seen perching on logs, preferring open water and secluded bays. They are also known as stiff tails, because like the Musk Duck, they have a rigid tail to assist in diving.

Preferred habitats are inland swamps with dense vegetation and they have a preference for Cumbungi  swamps. They range across eastern and southern Australia as well as the south-west of Western Australia.  During the breeding season they tend to remain hidden in dense vegetation, so are often hard to see. Open water is a favourite habit and they can congregate in groups, especially after the breeding season. Large groups have been recorded at times, the largest being about 8,000 birds, but generally smaller groups are most common.

Nesting is in dense vegetation. A domed nest is built with Typha leaves (Bull Rushes) and a cup of roughly woven structure of dead vegetation. Clutch size is generally 5-8 eggs. Unusually, they have a propensity for dump-nesting, where they will lay in the nests of other species, particularly the related Musk Duck. Ducklings are then raised by the other species. Yes, you read that correctly: Blue-billed Ducks are a brood parasitic duck! Young birds are precocial and able to feed themselves almost immediately after hatching. They have been recorded on their second day diving for up to ten seconds in search of food.

Damian and I are always muttering to each other about how we learn surprising things about birds when researching ‘Bird of the month’, and Blue-billed Ducks were no exception. Who knew there were secretive brood parasite ducks, with stiff tails, who can dive to 3 m deep but are barely able to walk on land, resulting in them avoiding anything that’s not water?

To find out more about Blue-billed Ducks – click here