Bird of the month: Black Swan

Welcome to Bird of the month, a partnership between Connecting Country and BirdLife Castlemaine District. Each month we’re taking a close look at one special local bird species. We’re excited to join forces to deliver you a different bird each month, seasonally adjusted, and welcome suggestions from the community. We are blessed to have the brilliant Jane Rusden and Damian Kelly from BirdLife Castlemaine District writing about our next bird of the month, accompanied by Damian’s stunning photos.

Driving between Newlyn and Creswick in central Victoria during spring 2022, I was excited to spot a pair of black swans who’d built a nest in one of the many ephemeral wetlands that formed this last winter. On a subsequent drive along the same route a few weeks later, there were tiny cygnets being shepherded and protected by their parents.

Before the discovery of Australia by Europeans, they knew as fact that all swans were white. Karl Popper, the Austrian philosopher, used this lack of knowledge in his famous parable of the black swan. That is, all swans are white, until you find a black one. This is important to science because it illustrates the testability and potential fallibility of scientific hypothesis. In other words, a scientific fact is so until proven otherwise, and importantly, it is testable. This is what differentiates science from pseudo-science and belief systems. 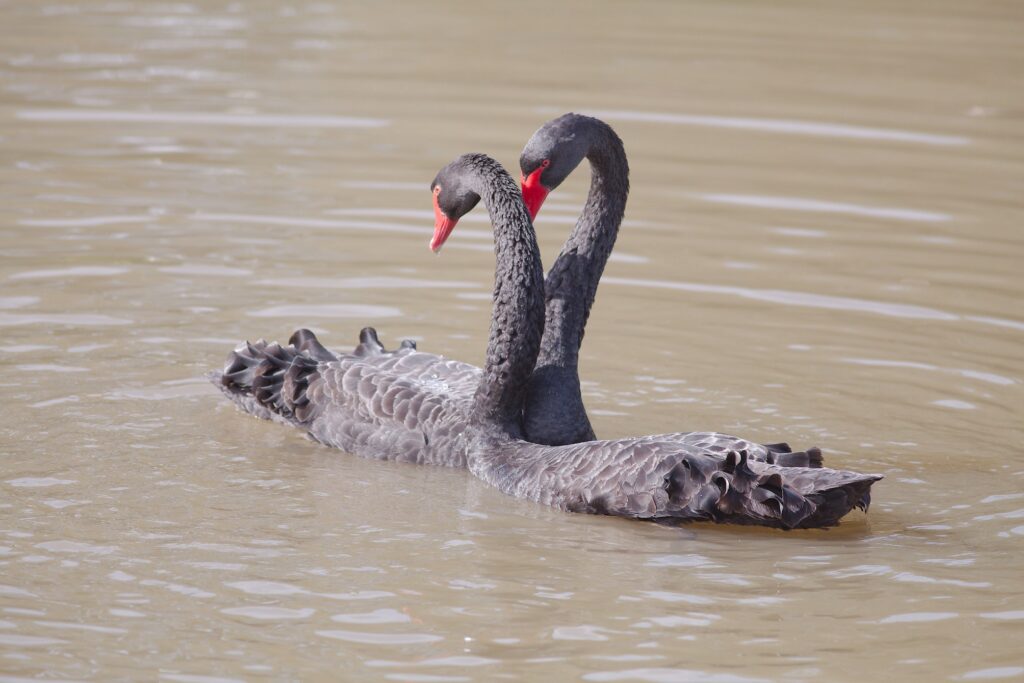 Within Australia, the black swan is nomadic, with erratic migration patterns dependent upon climatic conditions (photo by Damian Kelly)

Of course, Australians have always known that not all swans are white. Back to the big, black and beautiful bird – maybe more amusing than beautiful, when feeding bum up in estuaries – but you get my drift.

Although Australia has only one swan species, the Black Swan, across the world there are 24 species of swans ranging from the arctic to South America. They are a large bird, with males weighing 6 kg and females 5 kg, and a wingspan of 160-200 cm. They take flight with feet running across the surface of the water and need 40-50 m to get airborne.

The bills of swans (and the related geese) are adapted for grazing. They are largely vegetarian and feed in shallow water and on land eating grasses, aquatic and marsh plants. They can be found in fresh, brackish and saline waters. They are able to clear the salt absorbed from feeding and drinking salt water from their systems by spending a few days in freshwater, where the salt is collected in special glands above their eyes, and then shed through the nostrils or nares. 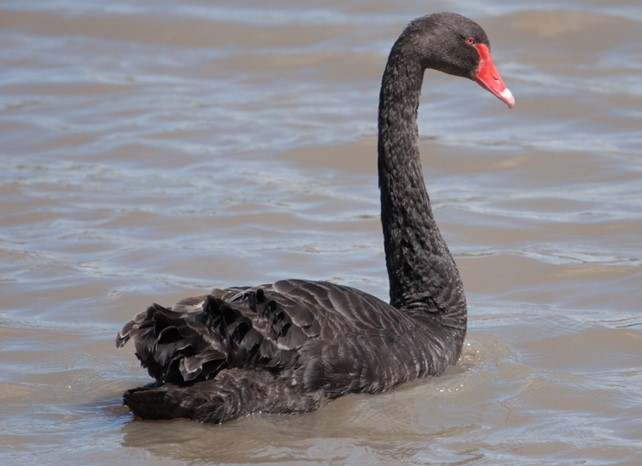 One of only three swan species that inhabit the southern hemisphere, the large Black swan is an unmistakable water bird (photo by Damian Kelly)

Breeding may occur at any time of the year if conditions are favourable. The nest is usually a large, buoyant heap of vegetation up to 1.5 m across and 1.2 m thick. Clutch size ranges form 4-10 young, depending on conditions. Adults are generally sedentary in suitable habitat but young will move to new areas after breeding.

They are distributed widely across Australia wherever there is suitable water. The Black Swan has been introduced into New Zealand and there are vagrants in Papua New Guinea. They can be common in parks and gardens where there is water and will readily take food offered by people.

« Critically endangered butterfly appears right on cue | Native pollinators on your property: who, where and what they do? »