Bird of the month: Black Falcon and Brown Falcon

Welcome to our fifith Bird of the month, a partnership between Connecting Country and BirdLife Castlemaine District. Each month we’re taking a close look at one special local bird species. We’re excited to join forces to deliver you a different bird each month, seasonally adjusted, and welcome suggestions from the community. We are lucky to have the talented and charismatic Jane Rusden from BirdLife Castlemaine District writing about our next bird of the month, with assistance from the brilliant Damian Kelly and Geoff Park, and photographs from Ash Vigus.

As usual on this blog, I have been assisted by local writer, photographer and bird expert, Damian Kelly. He had this to say:

‘A few thoughts on the Black Falcon, it is a nomadic species that prefers the drier inland. However, it can be seen at places as diverse as the Moolort Plains and the Western Treatment Plant near Werribee. Being an opportunist, it likes places with easy pickings as it is the pirate of the raptors – aggressively chasing down other raptors with prey and snatching it from them. Hence the Western Treatment Plant with lots of prey, including Brown Quail and plenty of other raptors such as Brown Falcons and Black-shouldered Kites, which it tries to pirate. Sometimes referred to as the bully of the raptor world, it has long, sharply pointed wings and flies rapidly – quite a sight! I have seen them following cattle and sheep as they flush up prey such as Pipits and they will hang out around areas with quail. I have also seen them along Rodborough Road (Moolort), a place where mobs of Brown Quail can be seen near clumps of taller grasses. Around this area, Moolort and the road to Clunes are likely spots. Further afield the Western Treatment Plant in near Werribee, is the place to see them.’ 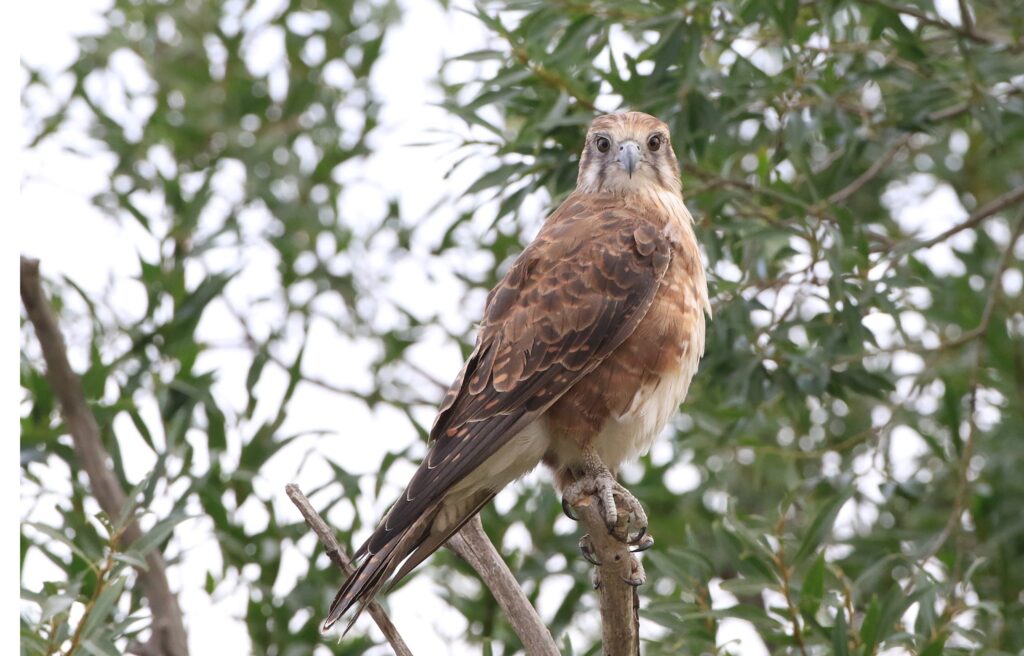 Brown Falcon – pale morph, with its pale chest, more upright stance and tail a similar length to its wings (photo by Ash Vigus)

To confuse the issue, Brown falcons come in three different morphs – pale, intermediate and dark – making it confusing when looking at a Black Falcon. However, the flight pattern, perched stance, tail length and chest colour will give you a nice identification tool kit. For further information on Black and Brown Falcons (or any birds local to Newstead) check out Geoff Park’s fascinating blog, Natural Newstead. Or take a drive on the Moolort Plains west of Newstead in central Victoria, and have a look for various raptor species, including Brown Falcons, and if you’re lucky, Black Falcons. 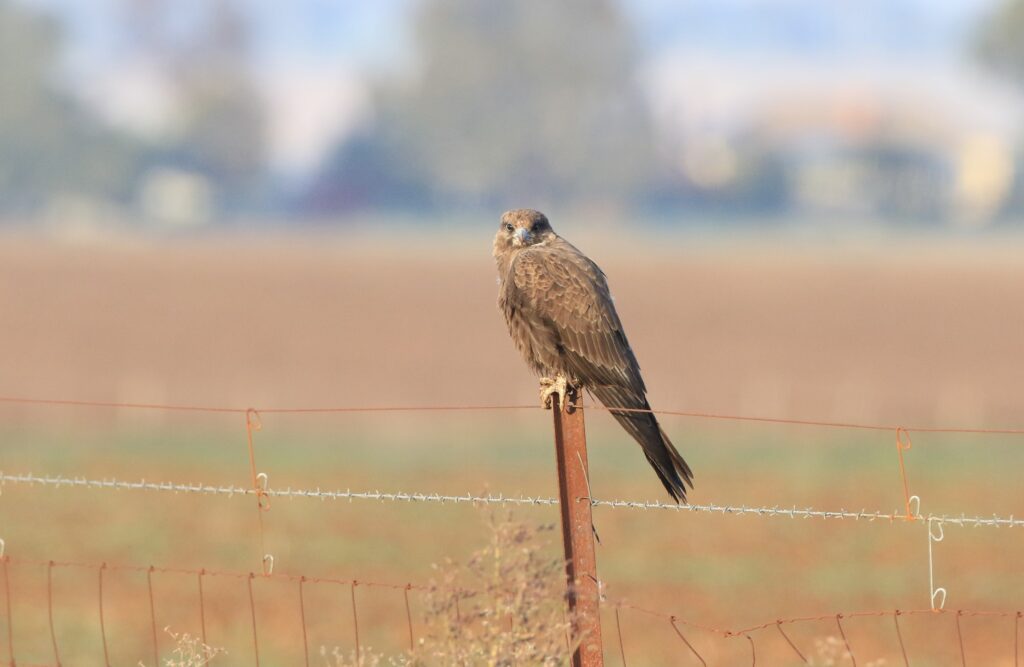 Black Falcon in its typically crouched perch and long tail, on the Moolort Plains (photo by Ash Vigus)

A big thank you to contributors to this edition of Bird of the Month – Jane Rusden, Damian Kelly and Geoff Park – for their amazing knowledge and advice, and to Ash Vigus for his gorgeous photos.

2 responses to “Bird of the month: Black Falcon and Brown Falcon”