Bird of the month: Australian Owlet-nightjar

Welcome to our second-ever Bird of the month, a partnership between Connecting Country and BirdLife Castlemaine District. Each month we’ll be taking a close look at one special local bird species. We’re excited to be joining forces to deliver you a different bird each month, seasonally adjusted, and welcome any suggestions from the community and our supporters. We are lucky enough to have the talented and charismatic Jane Rusden from BirdLife Castlemaine District writing about our next bird of the month, with some assistance from the brilliant Damian Kelly. You may be familiar with the second bird off the ranks.

The Australian Owlet-nightjar almost looks like a sugar glider, very cute with huge dark eyes peering from a hollow. Well known local author and photographer, Damian Kelly, has been trying for several years to photograph the resident Owlet-nightjars on my property as they soak up sun in their hollow entrance. However, they seem to know when he is coming and vanish.

Until recently, when he finally managed to coax the two birds at my place into modelling for him. Thanks for the photo Damian. The Owlet-nightjar is a near ground level, small and agile, insect and spider hunter, who emerges on dark often to drink and then search for prey. They will take prey on the wing, by pouncing from a low perch or running along the ground. So if you’ve got too many spiders for your liking, install a couple of nest boxes for Owlet-nightjars as they love them. 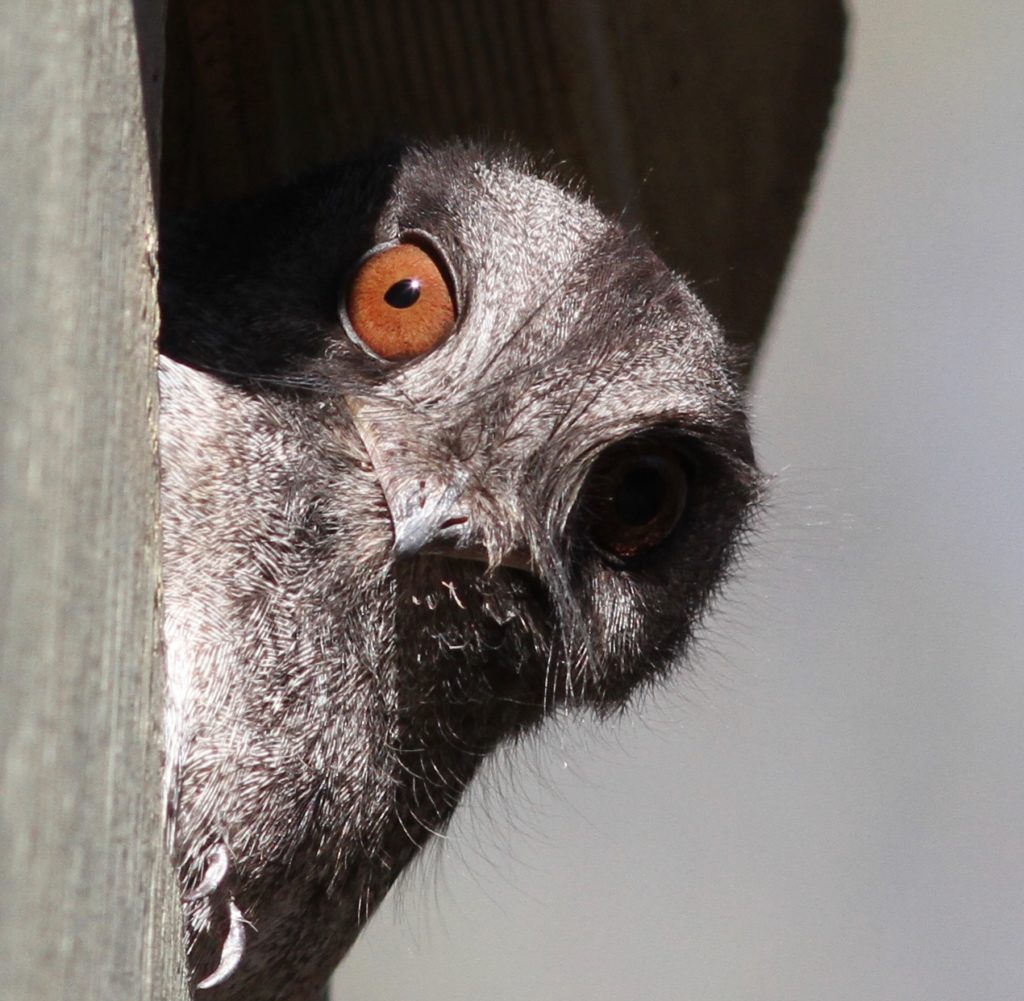 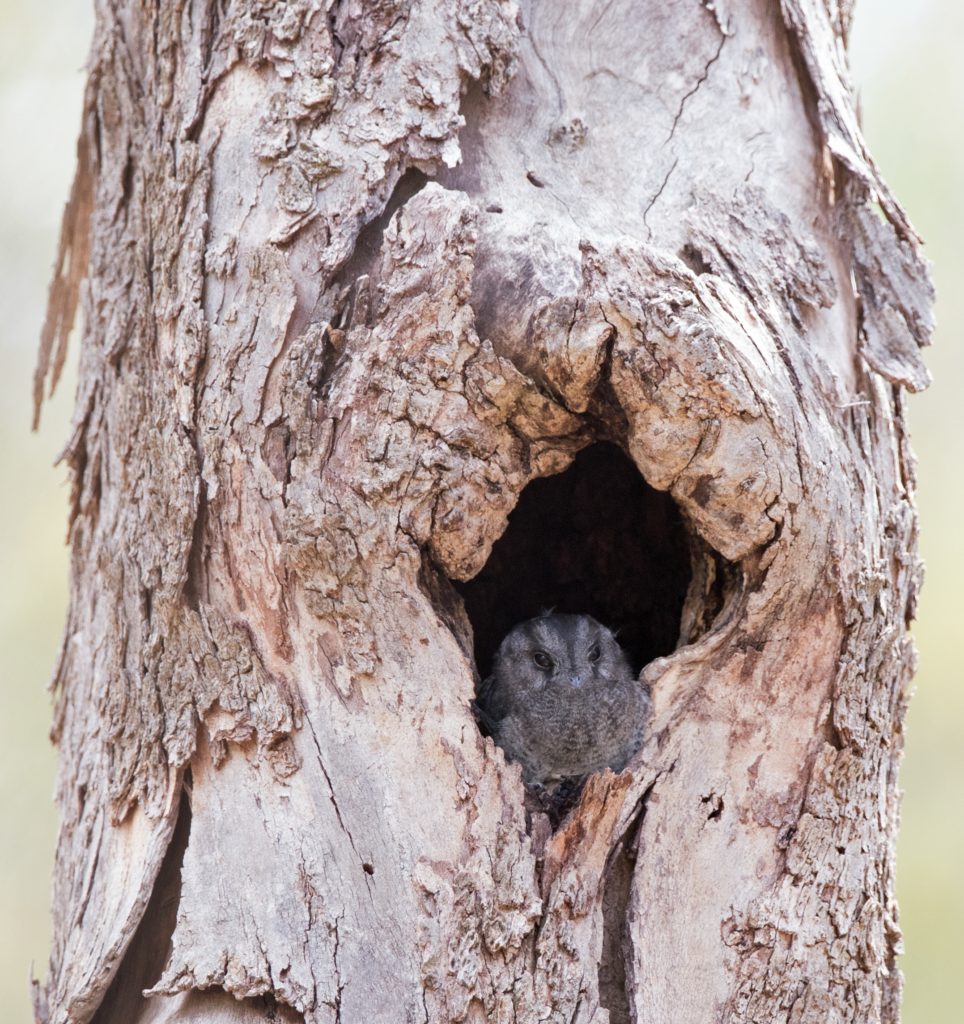 Interestingly they are neither owl nor nightjar, but blend of these two, and a distinct species. Around their small bill and wide mouth are long rictal bristles for nocturnal hunting, reminiscent of nightjars. Like owls they have a round head and huge forward-facing eyes. Unlike nightjars, the eyes of the Owlet-Nightjar do not reflect light and they can be a very hard bird to see at night. Both male and female birds look indistinguishable, although the female can be slightly larger by 2-5%, which is impossible to actually see. Mostly they appear soft mottled grey with darker head stripes running back from the eyes middle of the head. If you see a rufous coloured Owlet-nightjar, it is most likely female.

Immature birds look almost the same as their parents, which is a nice change when you are trying to identify birds, as in many species they can look quite different. This species, thought relativity common in Box Ironbark Forest, can be incredibly difficult to find and see. They have a habit of dropping low in their hollow and out of sight before we’re aware of them.

Occasionally you may be lucky enough to see one that has flushed and is perched on a branch, but your best hope is in a hollow in just about anything from trees, to rocks, to buildings, usually not overly high up. I started putting up nest boxes when our resident bird tried to roost amongst tools in the back of the ute for several days! This year I discovered two Owlet-nightjars habitually roosting about 200 meters apart. The photos show the one in the nest box and the one in the tree hollow. Damian’s research found that pairs mate for life, but reside in nearby hollows. 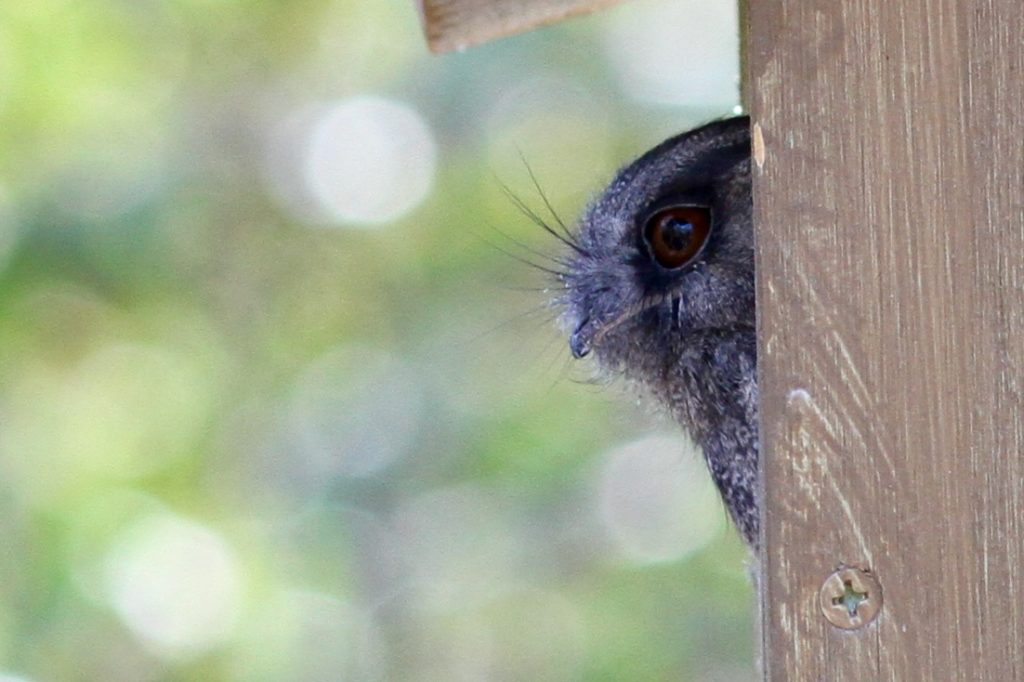 They will have a dozen or more hollows they use over their home ranges of up to 80 hectares. I wonder if the two I see every day are a mated pair?

To listen to the varied and lovely calls of the Australian owlet-nightjar, please – click here

One response to “Bird of the month: Australian Owlet-nightjar”