All aboard the love train: echidna playdate

We all know and love Tanya Loos, former Connecting Country employee, bird watching superstar, science writer and committed naturalist. We are lucky enough to have Tanya as a guest blogger this week, presenting her wisdom on the rarely encountered echidna train. Tanya is now working with Birdlife Australia, coordinating communications and engagement at a national scale. She has also written the much loved Daylesford Nature Diary, which was published a few years ago. Please enjoy her article below highlighting one of the most visually pleasurable phenomena in our region.

In the higher altitude foothill forests, the local wattles usually flower in late August and September. The silver wattles are blooming in the Wombat Forest and surrounds:  a few weeks early this year. One reliable sign of early spring is right on cue – the appearance of amorous echidnas!

On that lovely warm day at the end of July – just before this cold snap, we were delighted to host a pair of echidnas mating in the garden bed!

The echidna is usually a solitary animal, with a large home range of between 30 to even 100 hectares. The echidna wanders around his or her territory using extraordinary muscular strength to move rocks and logs to get to tasty termites and ant nests in the ground, and if another echidna is encountered, they usually ignore each other.

This indifference turns into the complete opposite in mating season – 100% commitment and attention! A female of breeding age, around five years old, suddenly becomes hot property in the bushland, and randy males follow the female around, shadowing her every move. This behaviour forms what is known as an echidna train. An echidna train is composed of a female in front, with three or four males following head to tail behind, forming an echidna conga line. An echidna train may have as many as 11 males!

Echidna trains last for about six weeks. I have heard three reports in the past week so we are right in the thick of echidna breeding season now. Isn’t it lovely that nature keeps on with these lovely seasonal cycles, whilst our human world is dealing with so much strife right now. Such comfort! 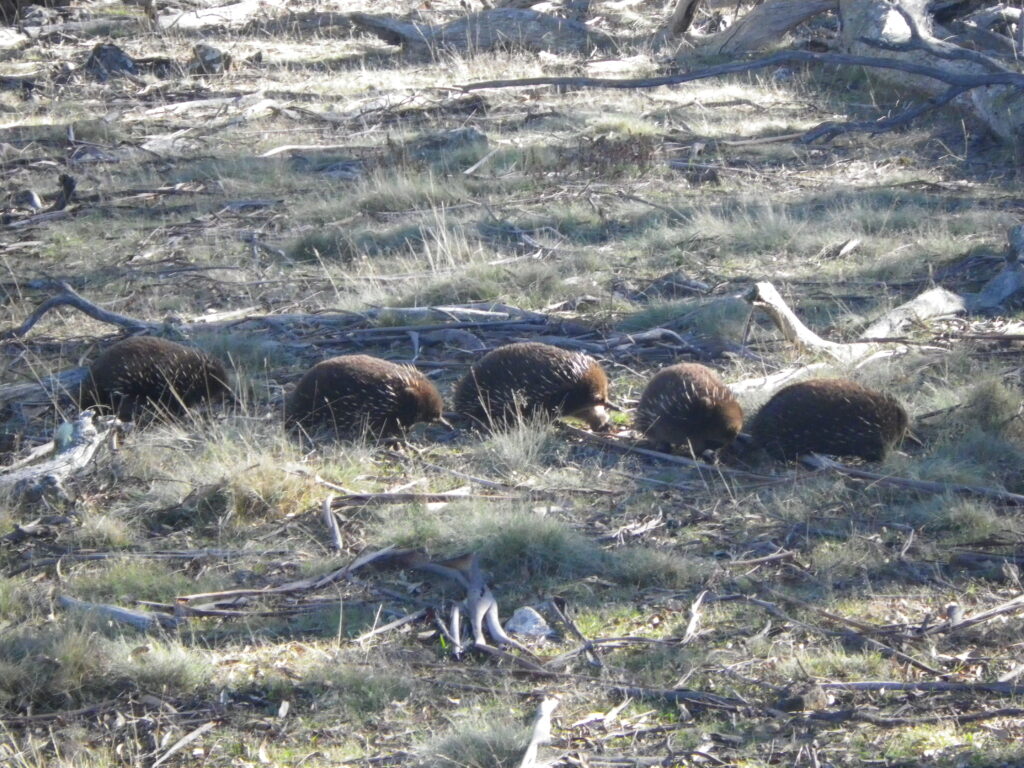 When it is mating time, another unusual behaviour occurs; the creation of a mating trench. The female decides she is ready to mate and partially buries her front legs and head into the soft dirt at the base of a tree or bush. The males get very excited at this point and start digging a trench around the female. If there is only one male the mating trench will be a simple straight trench, if there are several males, the trench becomes a large doughnut shaped ring that can be 20 cm deep. The males push and jostle each other in the trench until eventually only one male is in position to mate with the female. They mate on their side, with their openings (cloacas) pushed together.

Dogs find echidnas fascinating creatures! Please ensure that your dogs do not have the opportunity to disturb echidnas during this special time.

I am pretty good with recording my bird sightings on my Birdata app – but the others – not so good! But this sighting has prompted me to fire-up my Echidna CSI app and take the time to record this sighting!

Echidna CSI is a fantastic research project led by Tahlia Perry, a University of Adelaide PhD student. They are on Facebook here – the photos are just wonderful! Echidna trains aplenty, and it is so great to see the variation in echidna colour and amount of fur – the Tasmanian echidnas are very large and fluffy! The Echidna CSI project is also online here.

The Echidna CSI app is pretty easy to use with a smartphone – you can either record a sighting as you see it, or add a photo from your camera roll for older sightings. As my pics are not geo-tagged, I was directed to the Atlas of Living Australia website to upload my sighting/photo. It took about 15 minutes but now it is done!

The project is also collecting echidna scats for analysis. I have an echidna scat – I used to show it as part of my scats and bush detective displays to school kids, and I have to admit I would be sad to part with it! They are surprisingly big – a cylinder of tightly compressed sand/dirt with tiny fragments of insect exoskeleton throughout. But it is for a good cause!

As the team explain on their website: ‘We can get a lot of information about echidnas through the molecules in their scats. We can get out DNA and hormones to tell us who that echidna is, if it’s healthy, stressed or reproductively active. And so we can learn more about these wild populations without having to track or capture any of these animals.’

4 responses to “All aboard the love train: echidna playdate”

« Beginner birdwatching with Inala Foundation | What is a climate future plot? »