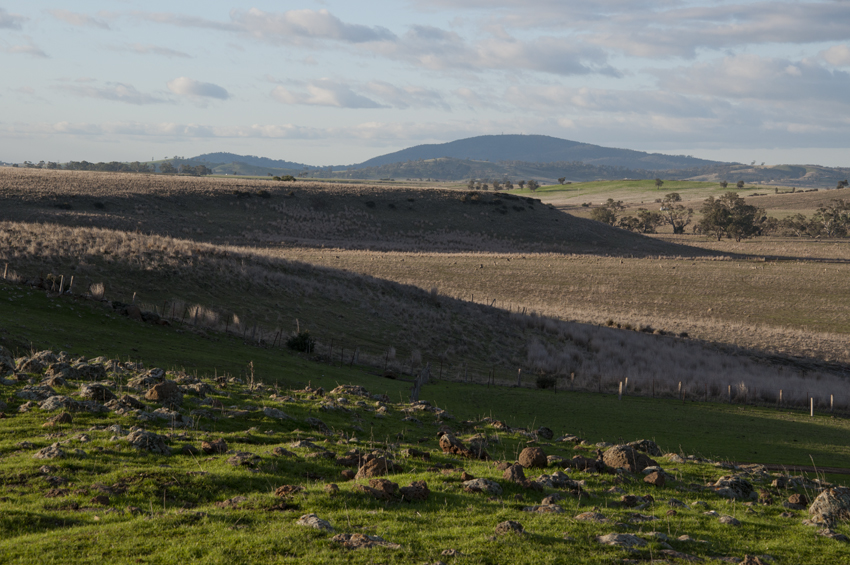 In the centre of the Mount Alexander Region, Castlemaine is situated on low sedimentary undulations and hills of the dissected uplands. Much of the surrounding area is hills and wooded slopes with rocky outcrops common and granitic boulders visible (former Conservation Forests & Lands CF&L1987).

To the northeast, Mount Alexander forms a prominent granitic ridge rising 250 metres above the surrounding land. To the southeast, the Calder Highway follows the sedimentary terraces and floodplain of the Coliban River. To the north, rolling sedimentary hills and valley slopes form fertile ground for the Harcourt apple orchards.

Undulating and low rolling sedimentary hills occur in several areas to the west and southwest of Castlemaine. These are characterised by rocky low hills and gentler, rock – free slopes and depressions. Most of these areas have been cleared for grazing. To the far west of the shire we have flat volcanic plains. This is some of the best land for agriculture in central Victoria.

Other areas exhibit moderate to steep slopes with shallow and stony soils, especially on the upper slopes and crests. Many of these areas have retained their native vegetation due to the steep and rocky nature of the terrain and the low fertility and low water holding capacity of the soils.

The health of the land is intimately linked to the health of the soil. The region has a great diversity of soil types that reflect differences in parent material, topography, climate, organic activity and age (e.g. degree of weathering). For agricultural purposes, many of these soils have some chemical and physical limitations (e.g. sodicity) which require careful management. More information available at:

To find out more about improving the soils on your land, click here.